The US views Iranian embassies in Europe as a cover for plotting terrorist attacks, State Department officials said, after Tehran slammed the arrest of its diplomatic envoy as an outlandish ‘false flag’ operation.

US Secretary of State Mike Pompeo intends to urge European allies to scrutinize Iranian diplomats more closely, an unnamed official told reporters on the way from the United Arab Emirates to Brussels, where NATO leaders are meeting on Wednesday.

Washington’s accusations of Iranian “malign behavior” in Europe come as the EU powers seek to maintain the 2015 JCPOA nuclear deal with Iran, which the US unilaterally withdrew from in May.

The Trump administration takes the recent arrest of an Iranian diplomat “very seriously” and sees it as evidence that Tehran is using its diplomatic properties to plot terrorist attacks, AP reported, citing the unnamed official. 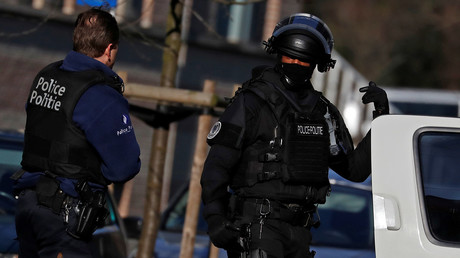 “Just this past week there were Iranians arrested in Europe who were preparing to conduct a terror plot in Paris, France. We have seen this malign behavior in Europe,” Pompeo told Sky News Arabia in Abu Dhabi on Tuesday, before boarding the plane to Brussels.

A counselor at the Iranian embassy in Austria, Assadollah Assadi, was arrested on July 1, in connection with an alleged plot to bomb the conference of the US-backed opposition group National Council of Resistance of Iran (NCRI) in France. Two Belgian nationals of Iranian origin were arrested on suspicion of planning to carry out the bombing.

Iran has strongly protested Assadi’s arrest and called the bomb plot a “false flag” operation intended to falsely accuse Tehran of terrorism and damage its relations with the EU. Europeans and Iran have been discussing the ways in which they could maintain the 2015 nuclear deal.

Last week, however, Iranian President Hassan Rouhani complained to French President Emmanuel Macron and German Chancellor Angela Merkel that the EU has offered only general commitments and no specific steps to preserve the nuclear deal in face of announced US sanctions.

The US and its Arab allies intend to sanction Iran in order to impose a high cost on the “regime” in Tehran against the alleged “malign behavior,” Pompeo said in interviews during his Gulf visit.

“We are determined to convince the Iranian leadership that this malign behavior won’t be rewarded and that the economic situation in the country will not be permitted to be rectified until such time that they become a more normal nation,” Pompeo said.

Outside attempts to ignite protests in Iran and drive a wedge between the government and the people are doomed to fail, Iranian Defense Minister Brigadier General Amir Hatami said on Tuesday.