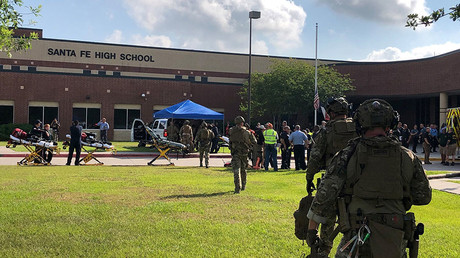 Up to 10 people have been killed at a school shooting in Santa Fe, Texas. Police confirmed that one person is in custody and a second person has been detained. A police officer is among those injured.

Speaking to reporters at the scene, a police spokesman said there had been between eight and 10 fatalities, including students and school staff. A male student has been confirmed as the shooter.

Images from the scene show the extent of the police presence, with students lined up outside the premises.

Police confirmed that “possible explosive devices” have been found at the school and off campus. Local residents have been asked to watch for suspicious packages.

#UPDATE Possible explosive devices have been located at the school and off campus. Law enforcement is in the process of rendering them safe. School has been evacuated. Call 911 if you see any suspicious item. #HouNews#SantaFeISD

Photos from the scene show the extent of the police presence, with students lined up outside the premises.

Earlier, Santa Fe Independent School District (SFISD) confirmed in a Facebook post that there had been injuries but did not provide detail. SFISD also said the situation was “active, but has been contained.”

Commenting on early reports of the incident, US President Donald Trump tweeted that the situation is “not looking good.”

In a press briefing at the White House, Trump expressed his sympathy for the victims of the shooting. “My administration is determined to do everything in our power to protect our students, secure our schools and to keep weapons out of the hands of those who pose a threat to themselves and to others,” he said.

Galveston County Sheriff Ed Gonzalez and the Bureau of Alcohol, Tobacco, Firearms and Explosives (ATF) have confirmed that their officers are responding to the incident.

One local hospital confirmed it is treating three people involved in the incident, including one under 18 years old.

We know that many of you are concerned about the patients from the Santa Fe High School shooting. Our doctors will be sharing another update at 11:45 a.m. on our @UTMBNews Twitter handle.

Speaking to ABC 13, student Leila Butler said that at 7:45am the school fire alarms went off and students fled their classrooms. She says that some fellow students reported hearing shots.

Another witness, Paige Curry, told reporters that she heard four to five shots before the fire alarm went off, but could not confirm seeing any injuries.

Harris County Sheriff Ed Gonzalez confirmed that one person is in custody and a second person has been detained. Gonzalez also said that a police officer is among those injured.

One is in custody, a second one detained. An injured police officer is being treated, the extent of his injuries are unknown.