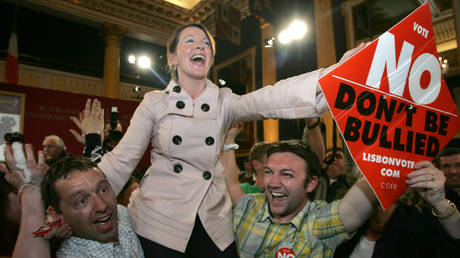 Footage of Labour leader Jeremy Corbyn branding the EU the “European empire of the 21st century,” after the bloc made the Irish vote again on the Lisbon Treaty, has been condemned by those who accuse him of facilitating Brexit.

The video from 2009, posted on social media by the Blairite blog, The Red Roar, sees Corbyn address activists in the Republic of Ireland, ahead of a second referendum on the Lisbon Treaty.

The left-wing politician is seen mocking the idea of holding multiple referendums on the same question, which some on social media have seized on to explain his reluctance at holding another vote on the UK’s membership of the European Union.

Corbyn tells the audience: “Don’t scrap your posters, don’t recycle them, because you’re going to need them for a third referendum.”

In the first referendum, in 2008, the Irish rejected the Lisbon Treaty by 53.4 percent to 46.6 percent. They were ordered to vote again by the bloc which caused consternation among many Irish politicians at the time. The second referendum took place in 2009 which saw the Treaty approved by 67.1 percent to 32.9 percent.

In his speech, the Labour leader claimed that the Lisbon Treaty made the EU “subservient to the wishes of NATO,” and that what is being created is “this military machine, this military Frankenstein, which will be so damaging to all of us.”

His remarks have been condemned by pro-Remainers and advocates of a people’s vote on the UK’s EU membership, such as Labour MP Owen Smith, who lost out to Corbyn to become the Labour leader in 2016. Smith has taken to Twitter to suggest this proved that Corbyn was “always going to facilitate Brexit.”

The SNP’s Stewart McDonald claimed Corbyn’s words could have come from the mouth of former UKIP leader Nigel Farage. However, others have sought to defend his comments, insisting Corbyn was offering a critique of what the EU was turning into in the context of Ireland rejecting a new constitutional amendment.

This is why Corbyn was always going to facilitate Brexit if he could: because he’s always believed in escaping the ‘European Empire.’ But he voted ‘Remain’, of course… https://t.co/WoEfejHOTL

It’s extraordinary this is being shared like it’s some smoking gun. 1) Irish referendum was on Lisbon Treaty. 2) When Ireland voted NO, it was made to vote again. 3) Corbyn’s critique of what the EU was turning into was absolutely legitimate. That’s why Ireland had voted NO! https://t.co/bWuKt5mHt9

Come on, this is poor stuff. There are legitimate criticisms to be made of the Lisbon Treaty. Corbyn’s comments are consistent with Remain & Reform.

One of those rare occasions where I would have agreed with Corbyn…If we had been given the chance to vote on the Lisbon treaty or Maastricht before it, then the EU may have changed course and we might have stayed… https://t.co/8nibJdYQU8

In January, the Labour leader claimed that he did not want to rerun the 2016 EU referendum, while he is also on record as saying he’s not certain how he would vote in a second referendum, as it would depend on what the question was on the ballot paper.