US ambassador to the UN Nikki Haley says she feels at ease with confronting Trump on the issues she feels uncomfortable with, including criticizing the US President’s unique “communication style,” which she refuses to defend.

Donald Trump has his own “communication style, but you’re not hearing me defend that,” the UN ambassador noted during an interview with CBS, after the presenter Rita Braver asked if she believes the presidential behavior to be “sometimes reprehensible.” 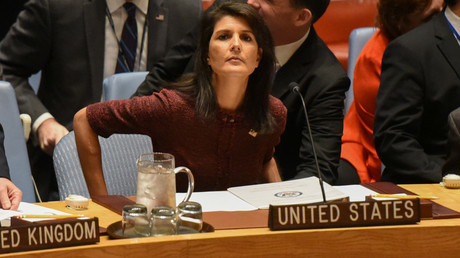 “What I will tell you is, if there is anything that he communicates in a way that I’m uncomfortable with, I pick up the phone and call him,” Haley said.

“I don’t need to be public about that. I think that’s a private conversation that should happen when I feel it, and I think it’s one that he’s receptive to when I do.”

Last month, Haley was accused by White House economic adviser Larry Kudlow of getting “ahead of the curve,” when she noted that Washington plans to impose more sanctions on Russia. “She’s a very effective ambassador, but there might have been some momentary confusion about that,” Kudlow said at the time.

The US Ambassador hit back: “With all due respect, I don’t get confused,” she told Fox News. When asked a few days later about her relationship with Trump, she described them as “perfect.”