Henry Bolton has a big week ahead of him, and so many unanswered questions: Will he still be UKIP chief after a party vote on Saturday? And who will be his Valentine on Wednesday – his wife, or 25-year-old ex Jo Marney?

On LBC’s weekday morning radio show with Nick Ferrari, Bolton faced a grilling from listeners. Some were avid, young UKIPpers keen to know why youth membership fees had skyrocketed to costing them an extra 900 percent, while others simply wanted to know if he was still sleeping with his youthful sweetheart and whether he would have done anything differently if he could have his time over.

Bolton took the time to explain to listeners what was in store for UKIP this Saturday: a leadership vote.

“Well there was a vote of no confidence in the National Executive Committee based on their concern I was associating with a lady named Jo Marney, who sent some private message before I’d even met her… which some claimed to be of a racist nature,” Bolton said.

Host Ferrari pressed the UKIP leader on his final comment, asking the 54-year-old father-of-three if he deemed Marney’s comments – when she called Markle a “negro,” described black people as “ugly” and said Markle’s African-American heritage would “pave the way for a black king” – to be racist. 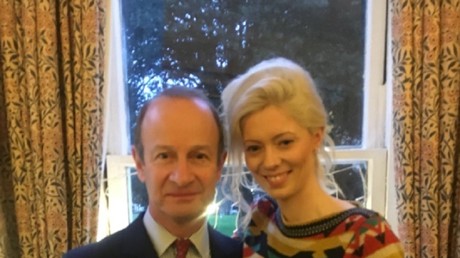 “They’re certainly fiery and provocative,” Bolton replied, dancing around the ‘r’ word. “They were taken out of context. The source has said at least one of them was doctored and he was misled into releasing them.” Bolton added: “I was unaware of them.”

Marney’s controversial rant landed Bolton in hot water, prompting UKIP into a unanimous vote of no confidence. Bolton will not face a leadership vote on Saturday, telling Ferrari that he had “three options,” depending on what will befall him at the weekend.

“Those cards are close to my chest,” Bolton said when pressed for details. “We’ll talk about it next week.”

Wrapping up the segment, Ferrari had one final, pressing question – would Miss Marney be receiving a Valentine’s Day card from Bolton on Wednesday? “Come on, let’s move on from that,” Bolton protested, laughing. “These things are private matters.”

Finally, Bolton let a concession slip: “She might get a card from me,” he admitted.