Britain has allocated an initial £100 million to create its own satellite navigation network – which would likely cost billions – after the EU called its participation in its existing Galileo project a security risk.

The move, which has been reportedly approved by Prime Minister Theresa May, was revealed by the Telegraph (then confirmed to the BBC) but has not yet been made public. First tenders for contracts are expected to be opened next month.

“We still want to be part of the Galileo project but we have got to prepare for all eventualities,” a government source told the newspaper, adding that the funding would help “map out how a sovereign satellite system would work.” 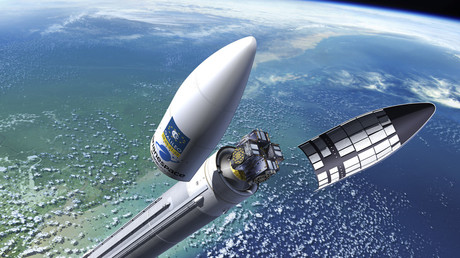 Britain has already funded €1.4 billion of the expected €10 billion cost of Galileo. A rival to US-controlled GPS, Russia’s Glonass and China’s COMPASS, the network of 30 satellites is due to become operational in 2020, more than two decades after work began on the project. While it will have civilian uses, it will crucially lessen European armies’ reliance on American technology, some of whose capabilities are still only open to the Pentagon.

In the wake of Brexit, the EU has argued that it cannot legally accept that any part of Galileo made by a contractor outside the union as “secure.” The UK says that quitting the European Union has not affected its allegiances, suggesting it could be given an exemption, and has threatened to sue for the money it has already sunk into the network, though Brussels is likely to regard any reneging on existing commitments by London dimly.

“There is obviously the question around Galileo. We would like to continue to participate and we’re disappointed by the approach that the European Commission has taken,” Graham Turnock, Chief Executive of the UK Space Agency, told the Telegraph. “We would still like a good outcome on Galileo but the signs, I’m afraid, are not terribly positive.”

The UK says that after the work done on Galileo by its own researchers, building a second network with the aid of rapid technological progress in the past decade alone, would cost considerably less and could be completed in a smaller timeframe than the European project, even if Britain has no experience of undertaking such an ambitious endeavor in space on its own.

Some also believe that the announcement of the “sovereign satellite system” is a negotiating tactic in itself, meant to show the EU that the UK is independent, while continental scientists still rely on contribution from Britain.

“I think they will find ways to include us because I think they need us,” Richard Wimmer, project manager for the Aeolus satellite launched this year, told the Telegraph, adding that Britain will still remain part of the European Space Agency, even after it quits the EU.

“Even on the Galileo, the payload was developed in the UK so the fundamental technology is coming from the UK. So they’ve got to find a way round that. You can’t say the UK can’t any longer be involved when we own the technology.”

While industry professionals seemed in place to benefit from the initiative, the news has attracted predominantly scorn online, from those believing the proposal is either wasteful, or unfeasible, or simply aghast at another unwanted consequence of Brexit.

It makes me laugh in a “this isn’t fucking funny” way.

Theresa wants to invest in the space race to restore our sat nav after we cut ourselves off from Galileo.

Meanwhile the NHS and the Police are underfunded.

Why are we doing this?!!#StopBrexit

As I understand it, UK has no reserved rights to frequency bands that would be suitable for a satellite navigation system, and no easy way to acquire them. Fantasy. Pure fantasy.

Beyond moronic. What is a “sovereign” satellite location system? One that represents the surface of the planet in accord with British government policy, unlike those foreign systems? That tints locations formerly part of the British Empire pink? https://t.co/v34R9fctQ0