As PM May praised the military for keeping the UK safe in her Christmas message, troops abroad were not exactly in a festive mood. It has emerged that 500 soldiers in Afghanistan received just £1 each to celebrate the holiday. 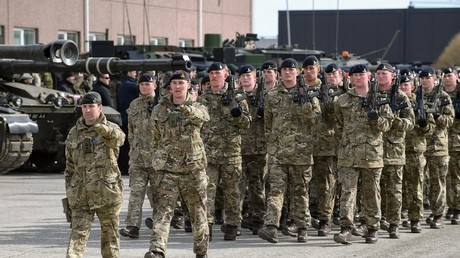 Five hundred British troops deployed to Afghanistan were allocated a total of just £500 ($700) for Christmas, the Sunday Times revealed.  Some said the defense chiefs’ frugality left the troops lagging far behind their foreign counterparts as soldiers from the  American contingent reportedly received eight Christmas trees, decorations, turkeys, numerous gifts, and even a copy of the new Star Wars film.

“The contrast between the American and British approach is staggering,” said a British officer stationed in Kabul. “As an army we don’t have as much money as the US, but even the Danish and Mongolians seem to be doing more,” he noted.

The tight Christmas budget has affected morale, one soldier told the newspaper: “They haven’t even sent us enough for a coffee. The Americans send in more money to feed the stray cats on their compound.”

While cash-strapped, the troops did not feel completely forgotten. “It has been staggering to see the number of parcels that have arrived for us from friends and family,” said the officer. In addition, Christmas lunch was still served on Friday, complimented by snow, which fell last week in Kabul, Afghanistan.

The report on Christmas allowances came shortly after UK Prime Minister Theresa May stressed the “enormous debt we owe to our armed forces and veterans” in her Christmas message to the military.

“Whenever you are called upon – regulars or reserves – you always give of your best and inspire us all with your service,” May said, adding, “the valiant hearts of our servicemen and women, many far away from their own loved ones at this special time of year, are working to keep us safe.”