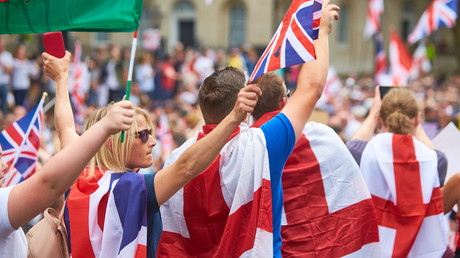 If Brexit has been good for one thing it’s threatening newspaper front pages emblazoned with Union Jacks. Now, as MPs prepare for the next big EU referendum debate, Brexit-backing editors everywhere have gone into overdrive.

The Sun – whose tagline is ‘For a greater Britain’ – published a detailed collage of all things British. These ranged from Stonehenge, the Houses of Parliament, a double-decker bus, a football; right down to stranger additions like the make-believe Loch Ness monster, a random rollercoaster, and a seagull. The dog’s breakfast of Britishness is topped with the headline ‘Great Britain or Great Betrayal’ – taking not-so-subtle aim at the vote that will take place in the House of Commons on Tuesday.

The front page was soon roundly mocked by the Twitterati, with some asking what on Earth motivated The Sun’s picture editors to include some of the more obscure landmarks. “I like how they ran out of iconic British landmarks and just though ‘F**k it, we’ll put on a roller coaster,’” one Twitter user observed. “I’m more worried by the giant Loch Ness monster,” another posted. “The cooling towers are an odd choice too.”

I’m more worried by the giant Loch Ness monster.
The cooling towers are an odd choice too.

Another Twitter user took the time to break down the origin of each of the depicted parts, highlighting the hypocrisy in that the majority of the landmarks shown were foreign-made or fictional. The front-page mess also struck a chord with Labour MP Anna Turley who lashed out at the Sun for condemning Tuesday’s vote and accused Murdoch of “bullying”.

Rupert Murdoch you can get stuffed. You’ve been a stain on this country’s character for decades. I’m not interested in your bullying. I will do what I believe to be best for the country and people I love. ✌️ 🇬🇧🇬🇧🇬🇧 pic.twitter.com/V73Rg4ptbc

The Daily Express headline, scrawled across a union jack, contained a clear threat to MPs: “Ignore the will of the people at your peril.” The left-wing Guardian columnist Owen Jones slammed the front page, branding it “dangerous,” while linking the rhetoric to the murder of Labour MP Jo Cox by a “fascist terrorist” who shouted “Death to traitors” as he killed her.

With far-right radicalisation intensifying, with one Labour MP having been murdered by a fascist terrorist declaring “death to traitors”, these sorts of front pages aren’t just chilling, they’re dangerous. pic.twitter.com/3q2TK8NaHS

Far right radicalisation?
What is it with you and your over the top sensationalism?
There’s over 3000 jihadis walking the streets ready to plan an attack against us all and you whinge a out this so called “far right”

All the more reason for Labour to stand up against this kind of behaviour and not let it win. But then all you care about atm is the fear of losing your votes, isn’t it?

Others pointed out just how long Brexit is actually taking to kick off. TV and comedy writer James Felton asked on Twitter: “Are we ever going to move onto the ‘actual f*****g details’ part of Brexit…” Others responded with tongue-in-cheek answers, explaining that mere details just aren’t the “will of the people.” Some simply pointed out the total voter count in the 2016 referendum “was barely half the population.”

Are we ever going to move onto the “actual fucking details” part of brexit or do we move straight from the “vaguely threatening wankily-typeset jingoistic slogans on flags” stage straight to the final “alright, where’s my cancer medication and food gone” phase? pic.twitter.com/7GaazrcYbj

Details aren’t will of the people. Facts aren’t patriotic. Experts won’t keep you warm at night. Brexit is going to go bigly well because it’s strong and stable and blue. We’ll be running through the wheat fields of success, I know because a bus told me so.

Amazing that when you think about it, the ‘will of the people’ only accounts to a quarter of the population that voted in favour of leave. Whereas the total voter count was barely half the population. Just saying.

The front pages come on the morning of Tuesday’s Brexit debate and vote – described by Shadow Brexit Secretary Keir Starmer as the “most important week of the Brexit process since the triggering of Article 50.”

The key moment will take place after 4pm local time, when the first set of votes go ahead. MPs will vote on the so-called ‘meaningful vote’ amendment, which could – if the government is defeated – effectively hand control of the Brexit process to parliament, with MPs then permitted to vote on the final Brexit deal. Brexiteers fear that, if this occurs, parliament could stop the Brexit process entirely.

Should the government lose, tomorrow’s tabloid front pages will be a sight to behold.