Johnson said that the Joint Comprehensive Plan of Action (JCPOA) agreement, signed between world powers in 2015, is necessary more than ever to keep an eye on Iran’s nuclear program. It comes after Benjamin Netanyahu claimed that Israel obtained 55,000 files showing Iran was “brazenly lying” when it claimed it was not pursuing nuclear weapons activity.

Netanyahu, in a televised address in English, accused Iran of maintaining a secret nuclear weapons program, dubbed ‘Project Amad,’ effectively breaching the terms of the internationally-backed deal imposed on Iran in exchange for the lifting of sanctions.

France has also called for the deal to be maintained, claiming Netanyahu’s evidence “confirm that part of the Iranian nuclear program, as France and its partners stated during the first revelations in the summer of 2002, was not civilian,” a spokesperson for the French Foreign Ministry said. 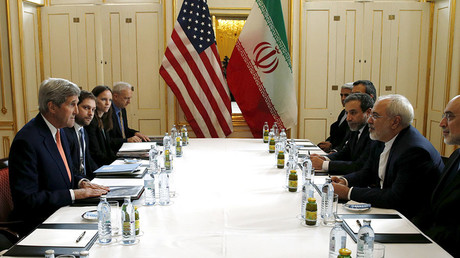 Many of the documents highlighted by Netanyahu, however, had also been seen by the UN nuclear watchdog – the International Atomic Energy Agency (IAEA) – as early as 2005 and made public by the agency in 2011. The watchdog judged that work on the weapons development program had ceased in 2003 and there was no evidence of weapons research since 2009.

The US nonetheless said Netanyahu’s allegations are proof that the deal is not being adhered to. US President Donald Trump, who opposed the accord, has until May 12 to decide whether to withdraw from the deal or not.

“The Iran nuclear deal is not based on trust about Iran’s intentions; rather it is based on tough verification, including measures that allow inspectors from the International Atomic Energy Agency unprecedented access to Iran’s nuclear programme,” Boris Johnson said.

“The fact that Iran conducted sensitive research in secret until 2003 shows why we need the intrusive inspections allowed by the Iran nuclear deal today,” he added in a statement.

“The verification provisions in the Iran nuclear deal would make it harder for Iran to restart any such research. That is another good reason for keeping the deal while building on it in order to take account of the legitimate concerns of the US and our other allies.”

Iranian Foreign Ministry Spokesman Bahram Ghasemi called Netanyahu’s allegations “worn-out, useless and shameful.” Foreign Minister Javad Zarif, who was integral in the deal’s completion, said that Netanyahu was attempting to influence Trump’s decision on whether or not to pull out of the deal.