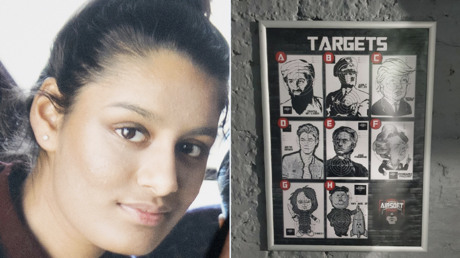 A shooting range in England has begun using an image of teenage ISIS bride Shamima Begum for target practice, after receiving a record number of requests from customers, and claims it’s just a bit of “light-hearted fun.”

Ultimate Airsoft Range in Wallasey, The Wirral near Liverpool has defended their actions, arguing that it helps to bring out the “inner child” in adults. They claim a target image such as Begum’s initiates some “fantastic reactions and conversations.”

Exclusive: a shooting range in Wallasey defends using images of Shamima Begum as target practice because of a ‘record number of requests’ from its customers. It allows people ‘to have some light-hearted fun bringing out the inner child in all” they tell us. More at 10am ⁦ pic.twitter.com/AzYlhY1ne6

The center insists that they provide a range of images of high-profile people, such as Donald Trump, Margaret Thatcher, and Justin Bieber, as shooting targets for their customers.

A spokesperson for the shooting range told the BBC that after viewing Begum’s recent interview in which she called on the UK government to bring her home, they had come to the conclusion to go ahead with using her photo, due to “her lack of remorse and empathy.”

The move has been condemned by many on social media, claiming the shooting range has gone too far. One Twitter user remarked: “Wouldn’t want to meet the inner parents.” Others have been more sympathetic, arguing that it may be “childish and distasteful,” but that we live in a “free society.”

Sounds like their inner child needs to be put in care.

Is this a police matter? Dangerously ill-judged and racist

Childish and distasteful but in a free society I guess they can shoot at whatever targets they please.

I can’t see how it’s any different from the picture of Thatcher I had on my dartboard as a kid.

Begum, who recently gave birth to her third child, told the Times in an interview from a refugee camp in north east Syria: “All I want to do is come home to Britain.”