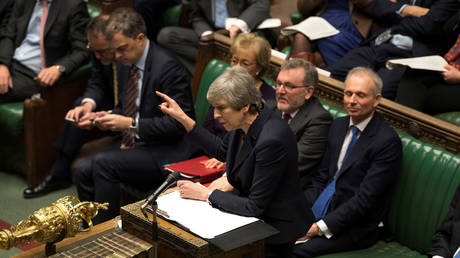 After two defeats in a row for her Brexit deal, Theresa May went for a gambit, having MPs agree to vote only for part of the deal that allows the UK to leave the EU, but does not set out a framework for a future relationship.

The vote, which is set for 2:30pm GMT on Friday, was made possible by May’s last-minute maneuver to sidestep House Speaker John Bercow’s move to disallow a third “meaningful vote” on her Brexit deal after it had already been defeated twice. Instead of persuading MPs to reconsider and get them to vote for the deal for a second time in one session, which is prohibited under procedural rules studiously observed by Bercow, May split her proposal in two uneven parts.


Lawmakers on Friday are voting for the most substantial and hefty part in terms of sheer volume and importance – the 585-page ‘Withdrawal Agreement’ that regulates the practical terms of the elusive divorce. The WA stipulates how much (£39 billion or $51 billion) the UK is to pay to settle matters with the EU, and includes the Irish backstop. This has become the bone of contention between May’s Conservatives and the Democratic Unionist Party (DUP), whose votes May desperately needs to secure the deal and eventually bow out as she has promised.

It’s possible that Theresa May will try to cut her deal in half (i.e. separate the Withdrawal Agreement from the Political Declaration) in order to gather support just for the WA.

For reference, these are what the two are: pic.twitter.com/NIzyKTTPsX

The DUP sees the backstop as a threat that might alienate Northern Ireland from the rest of the UK, since, under the May deal, it would continue to follow some EU rules to avoid a hard border between it and EU member Ireland.

The part that MPs are not voting on is the political declaration, a 36-page document that sets out a framework for relations between the EU and the UK post-Brexit. Originally part of the Brexit deal, the declaration is set to pave the way for the next round of negotiations, while touching on matters of sovereignty, freedom of movement, and a customs arrangement.


There is a lot at stake for May in Friday’s vote. The EU said that it would agree to extend the April 12 Brexit deadline until May 22 on condition that May gets the House of Commons to back her Brexit deal by the end of this week. If this does not happen, the UK has a fairly good chance of crashing out of the EU with no deal on April 12.