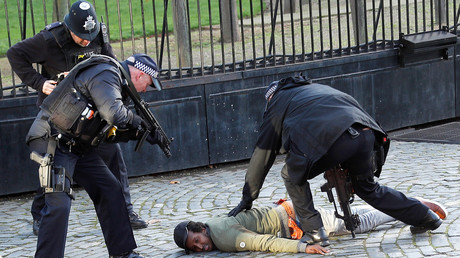 A man has been tasered and pinned to the ground outside the Houses of Parliament, London. Police are currently saying the incident, which happened inside Parliament’s Carriage Gates, is not terror-related.

The Metropolitan police have confirmed that the incident is now contained and that the suspected intruder has been arrested.

Passersby and journalists shared images on the incident on social media. Police, some of whom were armed, can be seen gathered beneath Big Ben, surrounding the ‘intruder’ who is sprawled on the ground.

The incident happened at same gate that was attacked last year.

On March 22, 2017, Briton Khalid Masood drove a car into pedestrians along Westminster Bridge injuring more than 50 people, five of them fatally. Masood then crashed his vehicle into parliament’s perimeter fence, getting out and fatally stabbing an unarmed police officer, PC Keith Palmer, to death, before being fatally shot by his colleagues.

Security around parliament has significantly increased, since the incident.