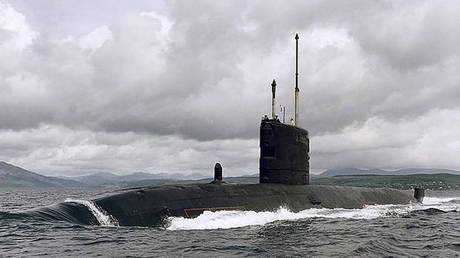 British maritime authorities have launched an investigation into a near miss incident involving one of Royal Navy’s nuclear-powered submarine and a passenger ferry sailing between Northern Ireland and mainland Britain.

A two and half hour ferry ride between Belfast and the Scottish port of Cairnryan could have turned deadly for passengers of the Stena Superfast VII ferry, which encountered a Royal Navy nuclear sub in a November incident only now made public. The unidentified submarine was submerged at the time of the incident with only its periscope visible above the surface of the water.


“Stena Line can confirm that on Tuesday 6 November 2018, Stena Superfast VII and a submerged submarine came into close proximity during a scheduled crossing,” the operator said in a statement on Monday. Despite the near miss incident, the transport operator claimed that “at no stage were the vessel, passengers or crew in any danger.”


The UK has ten nuclear-powered subs, four of which are armed with Trident nuclear missiles. The Royal Navy confirmed the encounter, without revealing the details of the incident or the submarine involved. The Navy is now assisting the Marine Accident Investigation Branch’s safety investigation, into “a close-quarters incident between the RO-RO (roll-on/roll-off) ferry… and a submarine operating at periscope depth.”