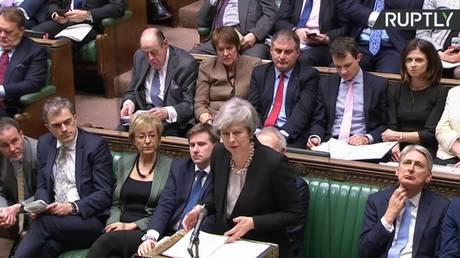 MPs debate and vote on a series of amendments to Prime Minister Theresa May’s Brexit deal, with some focused on removing the threat of a ‘no-deal’ and others looking to remove the contentious Irish backstop.

May tells MPs gathered in the House of Commons that they will get a further vote on her Brexit deal on February 14 if she fails to finalize an agreement with Brussels by that time.

Pro-Remain Labour MP Peter Kyle tells the prime minister that if she votes
for an amendment tabled by Tory Sir Graham Brady – which seeks to remove the backstop – then she will be voting against her own deal.

She defends her intention to vote against her deal, insisting it demonstrates her willingness to listen to MPs. The PM later confirms her government’s intentions for reopening the Withdrawal Agreement with the EU, in a bid to make changes to the backstop she agreed with the bloc late last year.

.@theresa_may is actually urging MPs today to vote against the Brexit plan she negotiated over two years and that she begged them to back only a few days ago. Quite extraordinary in history of parliament

DUP will now back Brady amendment

Turning to Labour MPs Yvette Cooper amendment which requires May to delay Brexit and extend Article 50 if she cannot secure a deal by February 26 – May claims such a proposal would not rule out no-deal, just delay a decision on an agreement being made.

May says she is demanding “significant and legally-binding change to the withdrawal agreement.”

Earlier John Bercow, the speaker, announced that he had accepted seven amendments to May’s deal to be debated and voted on.

Labour leader Jeremy Corbyn who was rigorously shouted down by Tory MPs during his reply to the prime minister reveals that his party will be backing Cooper’s amendment that would delay Brexit past March 29.

However, he says that any extension of Article 50 under Cooper’s amendment should only be for three months.

He tells May that she has given no clarity about what alternative arrangements to the backstop she will be seeking from the EU – adding that we are witnessing the “long, slow decline of the government.”