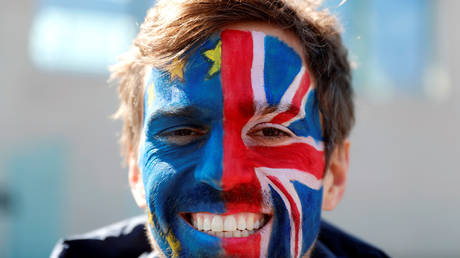 The vote was passed in the House of Commons on Tuesday, with 420 lawmakers backing the government motion and 110 voting against. May is still struggling to find enough backing to pass the Brexit deal she agreed with the EU, and it has been voted down in parliament three times already.

May traveled to Paris and Berlin on Tuesday to urge EU leaders to support her bid for the latest delay. After triggering Article 50 in 2017, the UK was originally due to have left the EU on March 29, 2019 but has yet to finalize its exit, with British lawmakers continually divided over acceptable terms and conditions. The PM has already pledged to resign once her deal is passed, and recently began crisis talks with the Labour Party in a bid to find some way through the current deadlock.

Also on rt.com
Snub? Theresa May arrives in Berlin for Brexit talks… and Merkel doesn’t come to greet her


Additional pressure on the prospect of a further Brexit delay is that European parliamentary elections are due to be held late next month. If the UK is still an EU member come election day, it would have a legal obligation to take part.

In a letter to the members of the other 27 member states, EU Council President Donald Tusk suggested they consider May’s June 30 delay request at their emergency meeting on Wednesday so as to better prepare against the chance of a no-deal Brexit.

Tusk also proposed a long Brexit delay, but not more than a year.

“I believe we should also discuss an alternative, longer extension. One possibility would be a flexible extension, which would last only as long as necessary and no longer than one year, as beyond that date we will need to decide unanimously on some key European projects.”