British MPs supporting the Saudi-led coalition in Yemen could be liable as war criminals if they continue to supply arms potentially being used to carry out attacks in the increasingly bloody conflict.

In the face of repeated atrocities in Yemen, including an airstrike against a funeral which killed 140 people on the weekend, Britain continues to supply arms to Saudi Arabia. The UK has made over £3 billion ($3.6 million) from arms sales since the military campaign began.

Britain also assists in other ways – it has advisers in control rooms advising the Saudi-led coalition bombing raids across Yemen, and provides essential diplomatic protection through the UN Security Council.

Supplying arms for the Saudi campaign could make the UK a ‘co-belligerent’ in the conflict under international law. This definition has widened considerably since a 2013 ruling in the trial of Liberian President Charles Taylor, and can now include “practical assistance, encouragement, or moral support” for war crimes.

In theory, the legal blowback could see British officials investigated for war crimes and could lead to prosecution if the sale of arms continues.

On Saturday, a funeral for the father of a prominent Houthi leader was attacked by up to three airstrikes in the Yemeni capital, Sanaa. The Red Cross says it prepared 300 body bags after nothing was left at the site but “a lake of blood.” 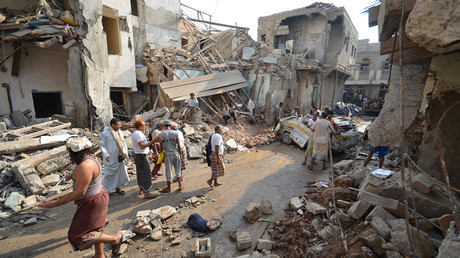 The UK minister responsible for the Middle East, Tobias Ellwood, has not condemned the attack nor demanded an independent investigation.

“I am deeply concerned by reports of an airstrike… The scenes from the site are shocking,” he said in a statement.

“I am raising my concerns with the Saudi Ambassador to London … and urge the Saudi-led coalition’s announced investigation into the incident to take place as a matter of urgency.

“There can be no military solution to this conflict. We urge all sides to recommit to political talks and to implement a cessation of hostilities.”

A Foreign Office spokesperson said the minister was there to “urge all parties to adhere to a new cessation of hostilities and come back to the negotiating table.”

Saudi Arabia is bombing Yemen in an attempt to restore Abdrabbuh Mansour Hadi – the internationally-recognized Yemeni president who fled to Riyadh after he was chased out of his country by rebels from the northern Yemen Houthi movement.

The 19-month war has left more than 3 million people displaced. According to the UN, 14 million are suffering hunger and malnutrition – almost half the population.

Children are the worst hit, with hundreds of thousands at risk of starvation. More than 370,000 children are suffering severe malnutrition.

The British government has faced repeated calls to ban weapons sales to Saudi Arabia since reports emerged alleging that the country was guilty of severe breaches of international humanitarian law.

Signatories to the Arms Trade Treaty, including the UK, are expected to renew their international arms sales to ensure weapons are not used or diverted for illegal purposes, war crimes or against human rights.

“Having regard to all the information available to us, we assess this test has not been met.”