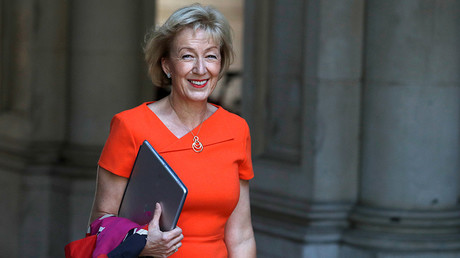 UK cabinet minister Andrea Leadsom’s call for British broadcasters to be more “patriotic” as the country negotiates Brexit has sparked an outpouring of hilarity online. However, many social media users suspect her comments may have a darker side.

Leadsom, who campaigned for Brexit, made the comments in a BBC interview during a discussion on the strength of Prime Minister Theresa May’s negotiating position compared to that of her EU counterparts.

“You’ve got a negotiating position which is completely unclear… We’ve got a political system which is unstable; many believe our economy is unfair; living standards are falling. What can you point to now and say that’s going well?” presenter Emily Maitlis asked.

“It would be helpful if broadcasters were willing to be a bit patriotic. The country took a decision, this government is determined to deliver on that decision,” Leadsom offered in rebuke.

“Are you accusing me of being unpatriotic for questioning how negotiations are going, questioning whether you have the position of strength that she said she wanted?” Maitlis responded.

“I’m not accusing you of anything, Emily,” Leadsom replied.

“I’m simply saying we all need to pull together as a country. We took a decision a year ago today to leave the European Union; we have a very strong hand and we are very well prepared for the negotiations,” she said.

This is a sinister threat to the free media. How dare Andrea Leadsom tell the press what they should think, this isn’t a George Orwell book. https://t.co/Ckj3j1TcRV

Leadsom’s call for media patriotism also drew a flood of reaction from others on the social network.

Many seized the opportunity to mercilessly mock Leadsom, while others, including many journalists, agreed with Farron’s view that the comments were dangerous.

However, Leadsom’s call clearly struck a chord with numerous people who took to Twitter to say the Leader of the Commons had it right.

I notice some journalists are already ganging up on Leadsom (again) for daring to point out the BBC’s pro-EU bias.

Leadsom also found herself at the center of controversy in the aftermath of last year’s Brexit vote when she was competing against May for the leadership of the Conservative Party.

At the time, she said in an interview that, as a mother, she had a greater stake in Britain’s future than May, who has no children.

The comments sparked outrage, as May had previously spoken about how she and her husband were affected by being unable to have children. Leadsom subsequently apologized and withdrew from the race, clearing the way for May to become prime minister.