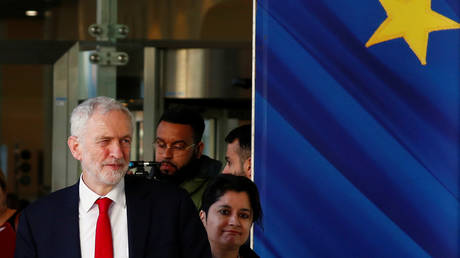 UK Labour leader Jeremy Corbyn has announced that his party will either table or support an amendment backing a second Brexit referendum this week.

Corbyn said that he would support a new referendum to avoid a “damaging Tory Brexit” and accused May of “recklessly running down the clock” in an attempt to force MPs to choose between her “botched deal” or a “disastrous no deal” scenario.

Also on rt.com
Admission of failure? May postpones Brexit vote for 2 weeks, sparks resentment both in EU & at home


Corbyn had faced criticism in recent weeks and months from other opposition parties for not calling for a new referendum — but with less than a month to go before the UK is set to officially leave the EU, the Labour leader seems to have been convinced that another vote may be the only way out of the current impasse.

Asked earlier in the week about his opinion on a second referendum, Corbyn said his party was discussing it and that it was something they would “consider” doing.


Labour would campaign for the ‘remain’ side in any new referendum, but British Prime Minister Theresa May has so far ruled out calling another vote, saying that the 2016 result should be respected.

Supporters of a second vote say that given the current Brexit deadlock, putting the choice to the people again, this time with more information available to them, is the only way to determine if Britons still want to leave the EU.

The decision comes a week after nine Labour lawmkers quit the party citing its approach to Brexit as one of the reasons.

Other prominent pro-remain Labour figures are welcoming Corbyn’s decision. MP David Lammy said that it would be “wrong” to force Brexit on the public in the current circumstances and that “any deal will be worse than the one we’ve already got inside the EU.”

The UK Times reported last week that Corbyn was warned that he could face another spate of resignations from the party if he did not back plans to put the question of Brexit to the public again.

Corbyn said he would work to force May to adopt his party’s approach to Brexit, which includes a permanent customs union with the EU (a major sticking point between the pro- and anti-Brexit sides), a close alignment with the single market and unambiguous agreements on future security arrangements. He also said Labour will support an amendment taking a ‘no deal’ outcome off the table.