A leaked telegram by the British ambassador, sent to Whitehall just hours after Donald Trump’s victory, suggested that his openness to “outside influence” be utilized for the sake of UK interests, and his “extreme ideas” be tamed.

In a memo cited by the Sunday Times, British ambassador to the US Sir Kim Darroch said UK diplomats have already laid the groundwork to guide the President-elect’s foreign policy in a way more favorable for London.

Donald Trump “is above all an outsider and unknown quantity, whose campaign pronouncements may reveal his instincts, but will surely evolve and, particularly, be open to outside influence if pitched right,” Sir Kim wrote.

“Having, we believe, built better relationships with his team than have the rest of the Washington diplomatic corps, we should be well placed to do this,” he said.

The assessment may seem embarrassing, but not entirely disconnected from reality. During the Trump campaign, critics lambasted his simplistic vision of international affairs, while others argued that his bluntness would derail negotiations on pressing issues like Israeli-Palestinian settlement or the nuclear deal with Iran.

His potential picks for the State Department and intelligence agencies have also been subject to stark criticism. A post-election paper by Dentons, a Trump-affiliated law and lobbying firm, lists Jose Rodriguez, architect of George W. Bush’s torture program, as possible CIA director, and John Bolton, a hawkish diplomat who championed the 2003 Iraq War, as Secretary of State.

Trump also repeatedly insisted that his deal-making experience would make America’s foes back down, and friends approve of a more aggressive US foreign policy. 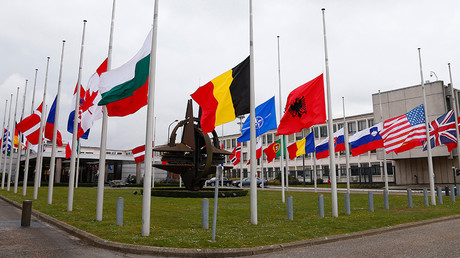 According to the newspaper’s government sources, top military and intelligence officials are developing plans to influence the next US administration on such issues as NATO, Iran, Russia, and immigration. In the meantime, PM May will visit Trump in Washington in February; then, the President-elect will be invited to the UK and be given “the red carpet treatment.”

In an attempt to appease Trump’s staff, Johnson will boycott an EU emergency meeting called to discuss interaction with the new administration. The Foreign Secretary’s spokesman told the newspaper the meeting was “unnecessary,” adding: “We will be working with the current and future administration to ensure the best outcomes for Britain.”

Trump’s current stance on NATO, however, still causes much concern in London, as it does in other European capitals. Previously, he described the bloc as “obsolete” and threatened to withdraw US military support to Washington’s allies if they don’t pull their own weight.

Whereas Western leaders demand that he clarify his position, NATO itself is assessing options in which Trump orders part of the US contingent to pull out of Europe. In this worst-case scenario, German magazine Spiegel reported, European countries would carry on alone and increase military expenditures to three percent of their GDPs.

In London, government officials have already drafted a paper listing all of Trump’s campaign statements on NATO and suggesting ways to respond.

“One of the government’s first priorities was to assess what Trump’s comments about NATO meant for the UK and what strategy we would pursue in dealing with them,” a cabinet source told the Sunday Times.