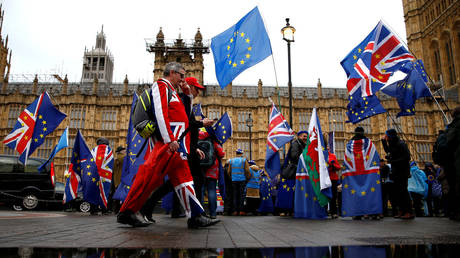 House of Commons Speaker John Bercow has delivered a blow to PM Theresa May, announcing that he will block a third meaningful vote on her Brexit deal unless her government makes “substantial” changes.

Addressing MPs in parliament, Bercow referenced Erskine May, the parliamentary procedure and constitutional conventions rulebook, on the subject of identical motions being put to the House.

Bercow told British lawmakers that the same motion “in substance… may not be brought forward again during that same session.”

It comes as various media report that the Tory government could put forward May’s Brexit deal to a vote for a third time – with no changes.

Downing Street has been frantically trying to garner support from the Democratic Unionist Party for the prime minister’s deal since it was defeated for a second time by 149 votes last week.

Many hardline Tory Brexiteers who voted against May’s agreement with the EU have claimed that their support hinges on whether the Northern Irish party decides to finally back it.

Also on rt.com
Keep calm & vote: May warns Brexit may take ‘months’ if MPs fail to back her deal


May has claimed that if MPs approve her deal by Wednesday, she will then request a three-month delay to Brexit at the EU summit in Brussels on Thursday, to enable parliament to pass the necessary legislation.

There has been a mixed reaction from EU leaders to the prospect of the UK asking for three months or more to delay Brexit. President of the European Council Donald Tusk took to social media to reveal that he will be appealing to the EU27 members to remain open to the idea of offering the UK a long extension period if they need time to rethink their Brexit strategy.

But an official from the French presidential office told the media that Paris will not support delaying Brexit if it simply means revisiting May’s withdrawal agreement. “So it’ll either be a no-deal now, or a change of plan from London, of which we see no sign at the moment,” the official said.

Also on rt.com
‘EU are like the f**king mafia’ – British rock band The Who’s Roger Daltrey