Desperate times call for desperate measures and new UK Foreign Secretary Jeremy Hunt invoked Vladimir Putin’s apparent joy to warn against a ‘hard Brexit,’ as the UK increasingly risks dropping out of the EU without a trade deal.

“Frankly, if we end up with no deal, the only person rejoicing will be [Russian President] Vladimir Putin,” Hunt stated on French radio in his first major European visit since taking over from Boris Johnson earlier in July.

In what is seemingly the latest ‘hard-Brexit warning,’ Hunt went on to say that no-deal is “the last thing we want,” before advocating for Prime Minister Theresa May’s Brexit white paper, that includes a free trade area between the EU and UK. 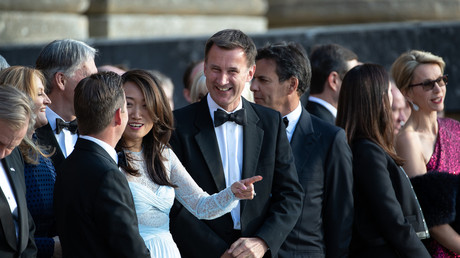 In a sign that he is fit for the role recently vacated by gaffe-prone Johnson, Hunt, while on an official visit to China, told his counterparts that his wife was ‘Japanese’ – she is Chinese. Britain’s top diplomat was at least on point when he quickly said “that’s a terrible mistake to make.”

Newspaper editors, who were sad to see the back of headline-generating machine BoJo, can rest easy knowing that his boots will be well-filled.

Hunt, who in his previous role as health secretary oversaw the worst winter crisis in the NHS’ recorded history, might need to do more than scaremonger over Russia to get the soft-Brexit he desires.

The ‘blame Putin’ mantra has been used ad infinitum by Remainers. Moscow was blamed initially for Brexit, supposedly using social media to influence the result. Those were accusations which were soon denied by tech giants; a YouTube exec telling a parliamentary committee inquiry into fake news that “no evidence of interference” was found, while Facebook told the same committee that a grand total of 97p was spent by Russia’s Internet Research Agency on referendum-related ads.

As fears of a no-deal Brexit increase, it seems the government is getting its excuses in early over who’s to blame.