Britain is becoming “dangerously complicit” in facilitating famine as a weapon in Saudi Arabia’s war against Yemen, it has been claimed. Academic Alex de Waal has joined former Tory minister Andrew Mitchell in warning the UK over its role.

De Waal says the US and the UK, and others on the UN Security Council, risk becoming accessories to the “worst famine crime of this decade.” He told the Guardian: “If you see someone starving, it’s not just that they’ve got a disease. Somebody has done it to that person. Yemen is really the most shocking case of our generation of a famine crime because the lines of culpability are so clear and there’s no denying them.” 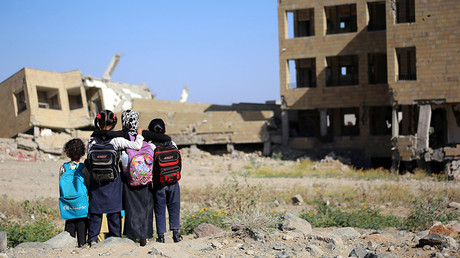 The Saudi-led coalition, armed by Britain amongst others, has been waging a deadly air campaign in Yemen since 2015, to support the government in its war against Houthi rebels. The fighting has killed more than 10,000 people, destroyed vital infrastructure, and triggered a cholera epidemic.

Earlier this month, the coalition closed all Yemen’s borders (land, sea and air), preventing vital humanitarian aid from reaching the war-ravaged nation. The UN called for the blockade to be lifted to prevent the deaths of thousands of people.

De Waal, author of the influential book ‘Famine Crimes,’ has catalogued the famines that have killed 100,000 people or more since the 1870s. He concedes that Yemen was food insecure, mismanaged, and in economic crisis, but argues the people have reached the point of starvation as a result of the military campaign on both sides.

The problem with prosecuting starvation is “that we don’t care enough to do it,” he said. “We should be saying to our political leaders and to the judges at the International Criminal Court: ‘You ought to be looking for who is responsible politically and criminally for the starvation in Yemen and bringing them to court.’ And if it embarrases not only our allies in Saudi Arabia and the United Arab Emirates, but our own governments here [UK] and in Washington as well… Well, so be it.”

His comments come just days after former Tory minister Andrew Mitchell said the UK is “directly promoting a famine and the collective punishment of an entire generation.” The ex-international development secretary warned of a human catastrophe “the likes of which we have not seen in decades,” according to the Guardian.

UN humanitarian agencies in Yemen are pleading with Saudi Arabia to permit the delivery of two urgently needed shipments of medicine and food aid blocked outside the port of Hodeidah, warning that the now-15-day Saudi-imposed blockade was endangering tens of thousands of lives.

“The position is very precarious,” Jane McGoldrick, the UN humanitarian coordinator for Yemen, said. “One of the aid shipments contains medicine to combat the cholera outbreak, and the other urgently needed food aid includes grains and rice.”

Antonio Guterres, the UN Secretary General, has dispatched officials to Riyadh to urge the Saudi government to lift the blockade so that humanitarian aid can pass through, but, as yet, no progress has been made. After international pressure, Riyadh lifted the blockade on southern ports, but retained the embargo on all Houthi-controlled ports in northern Yemen, including Hodeidah, through which 70 percent of aid has been transported.