UK-manufactured fighter jets may be “central” to UAE air strikes on the Yemeni port of Hodeidah which the UN has warned could result in hundreds of thousands of deaths if it is attacked.

The population of Yemen would be put in severe danger by a UAE bombing of the “lifeline” port. Situated on the Red Sea, it supplies 80 percent of aid to the country, where a three-year civil war has left the nation on the brink of famine.

The UN’s Humanitarian Coordinator for Yemen, Lise Grande, stated that, if the attack takes place, humanitarian agencies “fear, in a prolonged worst case, that as many as 250,000 people may lose everything – even their lives”. 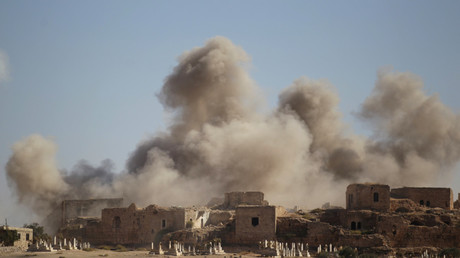 The UAE is a part of the Saudi Arabia-led coalition which has been bombing Yemen since the start of the civil war in 2015, as they support President Abdrabbuh Mansur Hadi in his fight against Houthi rebels.

Campaign Against Arms Trade (CAAT ) said British Prime Minister Theresa May should use her influence to stop the gulf countries’ air bombing of Yemen.

The UK has come under fire over its licensing of £4.6 billion ($6.2bn) of arms sales to Saudi Arabia since 2015. Many more pounds worth of arms may have been licensed to the UAE, CAAT claims.

Some £563 million ($754m) worth of arms has been sold by the UK to the UAE in the past three years, according to CAAT, including military-grade electronic equipment and components for military aircraft. The UK government was also criticized for negotiating deals to sell cyber surveillance technology which the UAE allegedly uses to spy on it citizens.

Andrew Smith of Campaign Against Arms Trade said: “No matter how dire the situation in Yemen has become, the arms sales have continued unabated. If an assault on Hodeidah takes place then it is likely that UK fighter jets and missiles will play a central role in it.

“If the UN’s worst predictions become a reality then those that have armed and supported the conflict cannot say that they were not warned. This war could not have been fought without their complicity and compliance.

“We are always being told about the influence that Downing Street supposedly carries with the Saudi regime and its allies. If that really is the case then it’s time for them to use it for good.”

As the conflicts looms, the UK’s Department for International Development told aid agencies working in Yemen to prepare contingency plans as an attack would likely take place.

The note adds Britain has done everything possible to discourage the attack “through diplomatic channels.” Adding that “despite these actions, a military assault now looks imminent.

“The Emiratis have informed us today that they will now give a 3-day grace period for the UN [and their partners] to leave the city. Please take all precautions necessary to prepare for this and let us know if there is anything we can do to assist you in any way. We are thinking of you and your staff at this very difficult time,” the note reads.

The impending attack on the port has been greeted with outright condemnation by human rights organizations.

Former Labour MP David Miliband, now president and CEO of the International Rescue Committee (IRC), said: “The port of Hodeidah is a humanitarian lifeline for the people of Yemen. It is imperative that humanitarian supplies are maintained. We repeat, again, that an assault on Hodeidah is a grave threat to life and livelihood. We urge the UN security council to meet to demand immediate assurances to maintain this critical facility.”

Despite the government’s apparent concern, calls by opposition MPs and campaigners to stop billions of pounds worth of arms sales to the UAE and Saudi Arabia have been rejected.