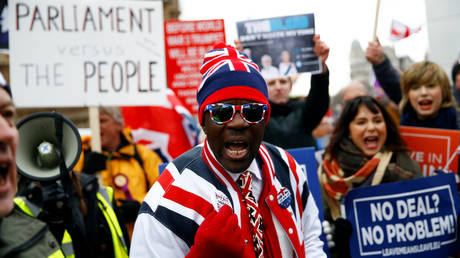 A UK Brexit minister has warned the EU that if new arrangements on the Irish backstop cannot be agreed to seal a deal, then Britain will refuse to pay the divorce bill, as PM Theresa May prepares for showdown talks with Brussels.

In the wake of parliament giving May the green light to her deal if she can secure “alternative arrangements” to the contentious backstop – the insurance policy that avoids a hard border in Ireland in the event of no deal – UK ministers have been ramping up the pressure on the EU.


In an interview with the BBC on Wednesday, Brexit minister Kwasi Kwarteng insisted that compromises would have to be made on the backstop from the EU otherwise it would lead to a no-deal – meaning the UK would not hand over any of the £39 billion divorce bill money.

Kwarteng told the BBC: “The final deal will have some give on the backstop from the EU. We have to look at new arrangements, technology to try and sort out those differences.

“If there is a no-deal they won’t get a penny pinch from us.”

May now has two weeks to broker key changes to the EU Withdrawal Agreement with Brussels, before MPs have another meaningful vote on her deal.

Early indications show that she is in for a tough task. Guy Verhofstadt, the European Parliament’s Brexit co-ordinator, has insisted that the Irish border backstop must remain part of the UK’s withdrawal deal from the European Union.

Welcome the UK Parliament’s decision to reject a no-deal & the hope of cross-party talks on future relationship. We stand by Ireland & the Good Friday Agreement. There is no majority to re-open or dilute the Withdrawal Agreement in the @Europarl_EN including the backstop.

Speaking this morning Michel Barnier said the EU’s position is “very clear” – they are not willing to renegotiate.

“It has been expressed yesterday by president (Donald) Tusk and president (Jean-Claude) Juncker will make a statement to the parliament this afternoon.”

German foreign minister Heiko Maas on prospect of renegotiating Theresa May’s #Brexit deal: ‘The withdrawal agreement is the best and only solution for an orderly withdrawal.

‘Germany and the entire Union are firmly on Ireland’s side.’

Verhofstadt’s Brexit steering group released a statement on Wednesday morning, insisting the Brexit deal agreed late last year is not up for re-negotiation.

“This applies especially to the backstop … without such an ‘all-weather’ backstop-insurance, the European Parliament will not give its consent to the withdrawal agreement,” they added.

A spokesperson for European Council President Donald Tusk has said that he will call PM May later on Wednesday evening to talk about Brexit. Tusk issued a firm statement on Tuesday evening in the aftermath of May receiving the backing of UK parliament to re-negotiate her deal, saying that the “Withdrawal Agreement is not open for re-negotiation.”

It comes as Brexit Secretary Steve Barclay, in an interview with the Today program on BBC Radio 4, failed to come up with “alternative arrangements” the UK government will put to the EU to replace the Irish backstop, while still preventing a hard border on the island of Ireland.