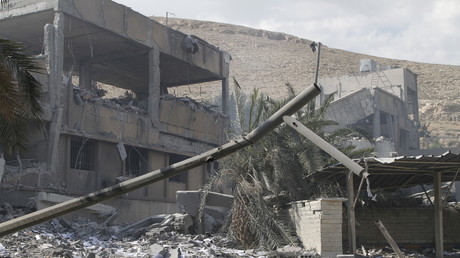 Labour MP Chris Williamson accused the UK government and its allies in the US and France of intervening in Syria against President Bashar Assad on the basis of “hearsay” rather than concrete evidence.

Hitting back at Prime Minister Theresa May’s claims that the strikes fired in the early hours of Saturday morning were in the national interest, as well as legally and morally right, the MP told RT: “What we’ve seen here really is a bunch of saber-rattling warmongers who acted precipitously without real evidence, and the evidence they are citing is even more flimsy than the ‘dodgy dossier’ [on Iraq in 2003].

“I mean what they’re relying on it seems to me is social media reports and hearsay,” the Derby North representative told RT’s Bill Dod.

Tory leader May authorized the launch of airstrikes alongside the US and France on three alleged chemical weapons sites in Syria in the early hours of Saturday. They were in retaliation for an alleged chemical attack in the formerly rebel-held city of Douma, Eastern Ghouta, which reportedly killed 70 people.

The original allegations were based on a series of videos published by Syrian rescue group the White Helmets, a group which operates in the areas controlled by rebel jihadist groups.

While refusing to assert the chemical attack had been staged, the MP warned it is “very easy to fake videos.”

He branded any use of chemical weapons “abhorrent,” but added: “Any type of military intervention has a hugely devastating impact on ordinary people’s lives.

“Before we launch into any military adventure in the way Theresa May has done, we need to be certain about the evidence and clear about the legal basis on which we are launching into this foreign intervention.”

It comes as Labour leader Jeremy Corbyn called for a new War Powers Act that would make parliamentary consultation mandatory prior to military action.

Williamson backed the proposed legislation, saying: “It seems to me Corbyn is also right to tread cautiously and call for legislation that would require any future military adventures to get at least signed off by the Commons before they go forward.”