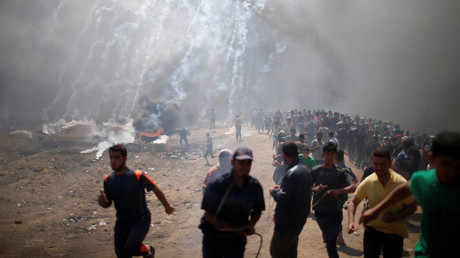 The Gaza protests have been making headlines across the world, but many people have hit back at US media outlets for a lack of coverage and an alleged pro-Israel bias.

A total of 60 Palestinians were killed on Monday during protests against the relocation of the US Embassy from Tel Aviv to Israel, according to the Palestinian Health Ministry. Most of the fatalities resulted from Israeli sniper fire.

Children were among the dead, including an eight-month-old baby who inhaled Israeli tear gas. However, many US media outlets are now under fire for not covering the deadly situation at the Gaza border, instead reporting with a pro-Israel slant. The term “58 Palestinians,” a previous death toll reported by the ministry, was trending on Monday, with Twitter users responding to mainstream media coverage.

“MSM remains largely uncritical of Israeli actions. However, social media is appalled and disgusted,” one person wrote on Twitter, referring to the situation as a “murderous killing spree.”

MSM remains largely uncritical of Israeli actions however Social media is appalled & disgusted.
Has Israel misjudged and with this latest murderous killing spree turned the tide of public opinion ?

Tension in Gaza as Palestinians prepare to bury 58 dead – https://t.co/gCrgcoqaSM

Some called for the names and faces of the deceased Palestinians to be published. “They’re human beings, individuals. They should not be talked about as mere statistics,” Islam & Liberty founder Iyad el-Baghdadi wrote.

Someone please post the names and faces of the 58 Palestinians killed by Israeli gunfire today. They’re human beings, individuals. They should not be talked about as mere statistics.

Others commented on the vague language used by media outlets which they claim is designed to skirt around the truth.

The media tells us that Palestinians in #Gaza are “dying”; that they are casualties of a “conflict” or a “clash”. Er no. They are being murdered, en masse.

Over and over again the American news media keeps saying “58 Palestinians were killed” but never saying who killed them. This isn’t just conservative media doing this it’s liberal media too. Did space aliens kill them ? Zombies ?

Fair.org contributing analyst Adam H. Johnson said that kind of vague language is a “formula” which you can “set your watch to.”

it’s become cliche at this point to note how US media obscures and spins for police violence in the US and US-backed Israeli violence against the Palestinians; “clashes”, “officer-involved”, “50 people left dead”, “an altercation”. It’s a formula. You can set your watch to it.

Meanwhile, human rights advocate @eemanabbasi remarked that the US media is painting Palestinians as “equal aggressors,” despite only being armed with “rocks and tennis rackets” – not “bombs and drones” like Israel.

Israeli forces have killed 43 and injured 2000 Palestinians thus far in Gaza. Not a single Israeli has been killed.

The US media is characterising Palestinians as equal aggressors. They only have rocks and tennis rackets, while Israel uses bombs and drones. #GreatMarchOfReturnpic.twitter.com/SCWtNHqxnR

Another person noted that if the situation was reversed, presumably with Israelis losing their lives, the coverage would be far different.

If the tables were to be turned, the media cycle would grind to a halt and everybody would have the issue in their faces.

But Palestinians just die. They’re never murdered. They die, and that’s all they do. They’re born dead and then they just die through no fault but their own.

One Twitter user hit out at the media for caring more about First Lady Melania Trump’s kidney procedure than the killing of Palestinians.

And a Palestinian writer, by the name of Lina, suggested that the actions of Palestinians would be framed as “Hamas violence” by Western media no matter what – even if they sent balloons filled with “glitter and confetti.”

Maybe Palestinians in #Gaza should test sending balloons with glitter and confetti to see how the western media is going to frame that as Hamas violence. #GreatMarchReturn

Much like many on the mainstream media critics, the Palestinian government has dubbed the violence a “massacre” by Israeli forces, and has called for international intervention to prevent more deaths. But despite that, professor James Petras told RT that the protests, along with “massacres” by Israel, will likely continue indefinitely.