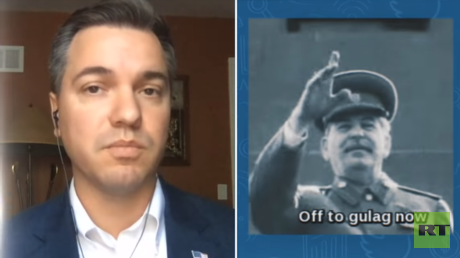 Austin Petersen, a Republican candidate in the Missouri Senate primaries who was banned from Twitter after posting one of the social network’s own images in an online debate, told RT that the site is a “threat to democracy.”

“Twitter is directly interfering with the election in the state of Missouri at the behest of a Democratic Super PAC that is working for my opponent Claire McCaskill,” Petersen said ahead of the primary vote, scheduled for August 7.

The former Libertarian presidential candidate was suspended from posting on Twitter, his main means of communicating with supporters, for 12 hours on Monday, after he responded to accusations of collusion with Russia with a GIF of Joseph Stalin saying “Off to Gulag now.”

The ironically-deployed GIF is frequently used in online debates, and is part of Twitter’s own stock image database.
Petersen says that the usually innocuous picture was flagged by Twitter after mass complaints from his political opponents, who all produced identical reports accusing him of verbal abuse.

The candidate believes that most of the clicks came from Shareblue Media, an activist media group initially assembled to promote Hillary Clinton that now forms a bulwark of opposition to Donald Trump and other Republicans. He says Twitter took their complaints at face value, whether due to unconscious or deliberate bias.

“This serves to continue the narrative that Twitter suppresses conservative and libertarian voices from being able to get their message out, because they have a bias that is deeply disturbing and a threat to American democracy,” Petersen told RT.

The original argument broke out when someone implied Petersen was cooperating with Moscow, based on the fact that his campaign was accepting cryptocurrency donations. A recent indictment of 12 alleged Russian security officers claimed that they funded their supposed anti-Democrat hacking efforts with bitcoin.

“They are trying to tie me into a narrative of someone who is colluding with Russia in order to facilitate an attack by my Democratic opponent, which is a bold-faced, egregious lie,” said Petersen.

McCaskill has personally claimed that she has been victim of a Russian hacking attack, saying that GRU operatives attempted to obtain the work passwords of her campaign team.