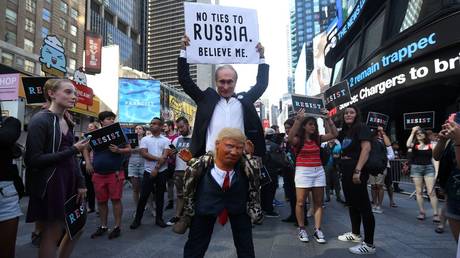 Russiagate disciples are squealing with joy after the New York Times wrote about the FBI apparently probing if Trump was secretly working for the Russians. In fact, the article states there is no evidence to support the theory.

In what appears to be a last-ditch Russiagate Hail Mary, the New York Times breathlessly reported on Friday – of course, citing people ‘familiar with the investigation’ – that the FBI began looking into whether the president was a covert Kremlin agent, after Trump fired then-FBI Director James Comey in May 2017. According to the Times, “agents and senior FBI officials had grown suspicious of Mr. Trump’s ties to Russia during the 2016 campaign,” but were reluctant to launch a formal probe into the matter. This all changed, the Times tells us, after Comey got the boot.


The investigation was quickly handed over to special counsel Robert Mueller, who continues to lead a probe into alleged Russian meddling in the 2016 election and collusion with Trump’s presidential campaign.

According to the Times, counterintelligence investigators “had to consider whether the president’s own actions constituted a possible threat to national security.” Agents were also tasked with determining whether Trump “knowingly work[ed] for Russia or had unwittingly fallen under Moscow’s influence.”

The decision to secretly investigate the president for possibly threatening national security triggered a “vigorous debate” within the Justice Department. The FBI, however, apparently felt vindicated after Trump remarked that Comey’s firing had helped relieve Russia-related political pressure.

NYT: After Trump fired Comey … FBI counterintelligence-intelligence became so concerned by the president’s behavior that they began investigating whether he had been working on behalf of Russia. … let that sink in. #RussianMole

Among Russiagate’s devout faithful, the report was treated as an earth-shattering revelation that reinforced their core dogma – i.e., that Donald Trump is a Kremlin agent installed in the White House by Vladimir Putin to destroy democracy.

Unfortunately, even the Times begrudgingly admitted – albeit buried in the ninth paragraph – that “no evidence has emerged publicly that Mr. Trump was secretly in contact with or took direction from Russian government officials.”


Indeed, Twitter was swamped with indignant comments accusing the paper of cooking up a massive nothingburger. One observant netizen pointed out that in October 2016, the New York Times even ran a headline that stated unequivocally: “Investigating Donald Trump, the FBI sees no clear links to Russia.”

Trump himself took to Twitter to mock the report.

“Wow, just learned in the Failing New York Times that the corrupt former leaders of the FBI, almost all fired or forced to leave the agency for some very bad reasons, opened up an investigation on me, for no reason & with no proof, after I fired Lyin’ James Comey, a total sleaze!” he wrote.

Wow, just learned in the Failing New York Times that the corrupt former leaders of the FBI, almost all fired or forced to leave the agency for some very bad reasons, opened up an investigation on me, for no reason & with no proof, after I fired Lyin’ James Comey, a total sleaze!

The White House said in a statement that the notion that Trump was in bed with Russia makes little sense, given the administration’s hardline policies directed at Moscow.
“Unlike President Obama, who let Russia and other foreign adversaries push America around, President Trump has actually been tough on Russia.”

This is the response from the White House tonight on the NYT story reporting FBI was investigating whether President Trump was working on behalf of Russia against US interests pic.twitter.com/ivRekJf2LY

The report also raises questions about whether Comey was being entirely truthful when he testified to Congress in December that Trump wasn’t among the “four Americans” targeted by the FBI counterintelligence probe into Russian meddling.

As one political pundit observed, the Times’ story raises more questions about the FBI than it does about Trump and his still unproven ties to Russia.

“Is NYT story about Trump, or about FBI malfeasance?” Fox News contributor Byron York asked in a tweet.

Investigation result: ‘No evidence has emerged publicly that Mr. Trump was secretly in contact with or took direction from Russian government officials.’ Is NYT story about Trump, or about FBI malfeasance? 4/4 End. https://t.co/L8U5rPbJup