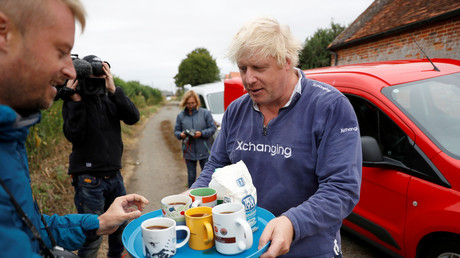 Approaching the journalists waiting outside his home in Oxfordshire, tray in hand and wearing a pair of blue surfer shorts, Johnson said he had nothing say on the matter, but wanted to offer the reporters some refreshments instead.

“I’m here solely on a humanitarian mission because you’ve been here all day and you’ve been incredibly patient and I feel very sorry for you because I have nothing to say about this matter except to offer you some tea,” he said.

Instead of calling it out as the stunt that it clearly was, the waiting British journalists lapped it up, literally, accepting the tea from Johnson, engaging in a bit of banter with the controversial politician and forgetting all about the reason they were outside his house in the first place.

“Okay, thank you. Thank you so much,” one journalist can be heard saying in response, while grabbing her cup of tea and forgetting to ask any more questions.

When the video was posted online, ITV journalist Carl Dinnen tweeted that if a politician was going to refuse to answer questions, offering tea instead was “the classy way” to do it.

Unsurprisingly, the fawning behavior of the British press didn’t go down very well with the rest of Twitter, where Dinnen and his colleagues were roasted for their submissiveness and sycophantic behavior.

He’s just so charming, Carl, isn’t he? When he’s not inciting racial hatred, consorting with fascists, and lying to the electorate, that is.

You can drink tea at home, there are important questions to be asked.

Nothing classy about that PR stunt. Step back & think about it. He’s basically treating you all like mugs, & you’re falling for it … 🙄😎🇪🇺

One user pointed out that there was a huge chasm between British journalists’ self-image as “bellicose and combative” seekers of truth and the the “fawning reality” on display in the video.

the chasm between British political journalism’s bellicose and combative self-image and the unctuous, fawning reality is absolutely colossal https://t.co/9m5sjnDns0

Others pointed out that the appropriate response from a journalist to a figure like Johnson trying to dodge important questions was definitely not: “Thank you very much.”

Breaking Twitter hiatus having just seen Boris Johnson tea video. As a journalist, your reaction to a politician giving you a cup of tea instead of the quote you want should never ever be “thank you so much”. As you were.

It quite literally did get him off the hook, everyone can watch the video with their own eyes, and it features “journalists” let Boris Johnson get away with answering no questions and instead getting goo-eyed over cups of tea. https://t.co/xMx54XWxA1

That video of British journalists happily sharing tea with Boris Johnson is all one needs to learn about the scales of complicity of much of UK press with racism, Islamophobia and worse.

Others suggested that Labour Party leader Jeremy Corbyn, who does not have many fans among the British press, should start offering journalists cups of tea instead of answering questions to see if it makes any difference.

I’ve worked out where Jeremy Corbyn’s going wrong. All these years he’s never offered the journalists outside his house so much as a glass of water.

All he had to do was offer them some tea, then he could say whatever he like and they’d still call him “classy”.

Trying to imagine the reaction of the British media if they were doorstepping Corbyn and he went outside in his pyjamas holding a tray of tea. Did we miss a trick here or are they just pathetically deferent to Boris Johnson

…and some just had a bit of fun with the incident, reimagining the infamous David Frost interview with Richard Nixon over the Watergate scandal and how it might have gone differently if Nixon had just offered the journalist some tea.

Frost: Would you say that there are certain situations where the president can decide that it’s in the best interests of the nation, and do something illegal?

Nixon: Have a cup of tea.

Frost: Thank you very much. pic.twitter.com/PzA5orCXfk

Do you remember when Richard Nixon offered journalists a cup of tea outside his house and they accepted with a smile and gave back a free pass on his total lack of moral character in public office?

Nor do fucking I.