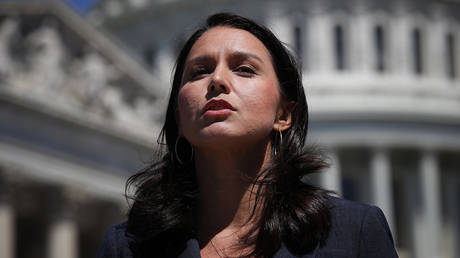 Democratic presidential candidate Tulsi Gabbard has introduced a bill to Congress which would prevent President Donald Trump from withdrawing the US from the Intermediate-Range Nuclear Forces Treaty (INF).

Speaking at a press conference on Friday morning, Gabbard said that Trump’s decision to pull out of the 1988 treaty was “reckless,” was “exacerbating a new Cold War” with Russia, and could spark another arms race.

“Walking away from this agreement doesn’t solve our problems, it makes them worse. It doesn’t bring us closer to peace, it moves us closer to war,” she said.

Also on rt.com
Who do you trust more? NBC journalist’s stab at RT backfires spectacularly


Gabbard said she was introducing the bill, called the “INF Treaty Compliance Act,” not only to prevent the escalation of a new Cold War, but to “stop more American taxpayer dollars from being wasted on military adventurism that makes our people and our country less safe.”

She said that rather than scrapping the treaty, the US should be working to expand it and bring in other countries, including China.

I’m running for President to end our regime change wars, work to end new Cold War, & walk us back from the abyss of nuclear war. We face greater risk of nuclear catastrophe now more than ever. I’m introducing a bill to stop Trump from scrapping INF treaty & sparking new arms race

The bill would prohibit “a single taxpayer dollar from being used for weapons that would breach the treaty,” she said.

The bill is co-sponsored by three of Gabbard’s House colleagues including freshman congresswoman Rep. Ilhan Omar.

Both Washington and Moscow have repeatedly accused each other of violating the terms of the nuclear pact — and earlier this month, Russia said it would quit the treaty in a “mirror response” to Trump’s decision.