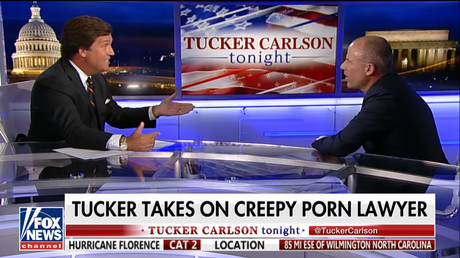 After the show, Avenatti slammed Carlson for his “lack of professionalism,” and called Fox News “Complete garbage,” and “trash television.”

The extent there was any doubt as to the lack of professionalism of @TuckerCarlson or @FoxNews before tonight, there is no longer. What happened with the chyron tonight was a disgrace. Complete garbage – trash television. A new low.

The Tucker Carlson Michael Avenatti interview is the perfection representation of Twitter: lots of yelling, talking past one another, ridiculousness, stupid grandstanding and makes me want to use the mute button

Avenatti’s representation of Stormy Daniels has made the California attorney a household name. Since announcing Daniels’ lawsuit against President Trump – which alleges a nondisclosure agreement between her and the president is invalid, as he did not personally sign it – Avenatti has logged over 100 television appearances, using the airtime to rail against Trump.

Avenatti teased a potential run at the presidency in a tweet in July. Since then, the lawyer has posted a list of his policy positions – standard Democrat positions for the most part – on Twitter, and visited Iowa last week to speak at a Democratic fundraiser and “explore a run for the presidency.”