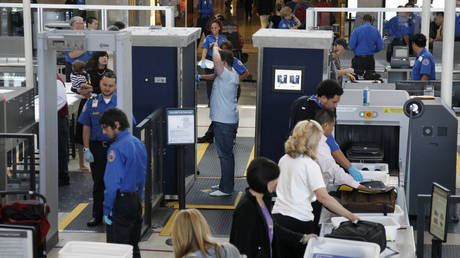 The TSA is demanding modifications of a new airport security system because it poses “privacy risks” to passengers by showing too much of them on display, a newly published document has revealed.

Following a demonstration, the Transportation Security Administration has requested changes to the contract because the scanner they received “has privacy risks associated with the Graphical User Interface,” says the document dated March 26 and made public by Quartz on Monday.

While the document provides no further details on the exact nature of the privacy risks, the TSA required the scanner’s manufacturer to add additional security features before it would consider using the device in a “live environment.”

Using another government database, Quartz identified the contractor – whose name is redacted in the document – as Virginia security firm ThruVision. The document refers to ThruVision’s TAC scanner, which the company describes as a “proven people-screening camera that sees any type of item.”


The device is supposed to be part of TSA’s “Future Lane Experience” (FLEx), an effort to speed up security checks that have become a major headache for passengers in many airports.

The Los Angeles County Metropolitan Transportation Authority partnered with the TSA last year to deploy ThruVision’s portable TS4 scanner, which the TSA claims to have vetted “extensively” prior to using it on LA commuters. It is unclear whether the TSA had similar concerns about the TS4 before the device was used in the field.

Revelations about the TSA concerns over the new scanner come after last week’s report by ProPublica that accused the agency’s current hardware of “discriminating” against African-Americans by misreading their hair, requiring a disproportionate number of pat-downs.

Airport body scanners were designed with racial bias and new data shows that the technology contributes to discriminatory searches against black women and people who wear head coveringshttps://t.co/SyTPbW5QKq

The ACLU slammed the TSA in 2009 for using scanning technology to conduct “virtual strip searches” that provided TSA employees with photos of passengers’ genitals, breasts and buttocks. More was revealed in 2010, when the Electronic Privacy Information Center (EPIC) published TSA documents which further detail the scanners’ invasiveness.