Following weeks of speculations about her health, first lady Melania Trump re-appeared with a sobering statement, hinting at her disapproval of her husband’s immigration policy.

In an attempt to halt the forced separations of migrant families crossing the US-Mexico border, the first lady verbalized her apparent disapproval of Trump’s ambitions. In a comment to The Hill, Melania’s communications director, Stephanie Grisham, said that  “Mrs. Trump hates to see children separated from their families.” 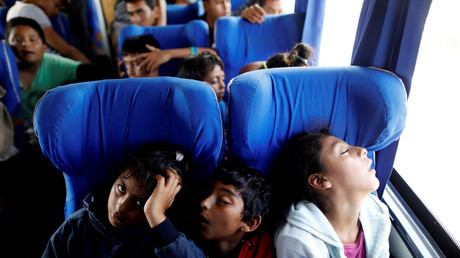 First lady’s stance was fortified by a former first lady, Laura Bush, who defined Trump’s line as “cruel” and “immoral”.

Trump administration’s “zero tolerance” policy on migration sparked a heated dispute between Democrats and Republicans. While the first attacked the Republican President for being utterly cruel, their Republican opponents laid responsibility on the Obama administration whose policies weren’t very different from Trump’s.

Melania’s unusually daring statement came after weeks of total silence that fed all kinds of conspiracy theories. Rumours had it she either had an incurable condition and was facing imminent death or had simply moved out of the White House and was living in the country.

In the end it became clear that Melania was neither near death, nor ousted from the White House, but recovering from an invasive treatment of a “benign kidney condition”.

President Trump wouldn’t be himself if he could swallow countless headlines either speculating about Melania’s mysterious absence or demonizing him personally. He lambasted the media for spreading “vicious” rumors, claiming that not only Melania was well and alive but was even spotted by some reporters “walking merrily along to a meeting.”