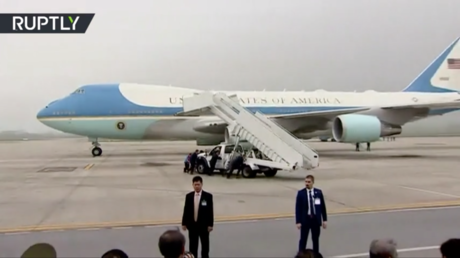 As US President Donald Trump prepared to make a rather hasty exit following a no deal at the highly anticipated Hanoi peace summit with North Korea, an unexpected malfunction added insult to injury.

While North Korean leader Kim Jong Un made a somewhat awkward entrance to the summit, as his train overshot the waiting red carpet and his interpreter was forced to sprint after him, Trump’s exit was marred by a minor mechanical fault which delayed takeoff for a brief period while Secret Service agents manhandled the malfunctioning stair car out of the way.

Trump’s unexpectedly early exit provided some initial confusion as reporters waited for a scheduled lunch between the two world leaders prior to the announcement that the summit had, in fact, already ended without any agreement reached.

Also on rt.com
We thought it wasn’t a good thing ‘to be signing anything’ – Trump on Hanoi summit with Kim