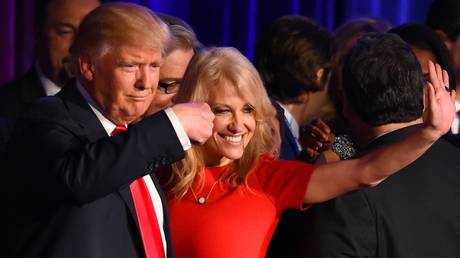 Donald Trump was honored as the year’s worst actor at the 2019 Golden Raspberry awards – a satirical spin on the Oscars. Razzie judges canned the US president’s “acting” in two documentaries released last year.

Trump was awarded a Golden Raspberry for his roles in Michael Moore’s documentary ‘Fahrenheit 11/9’ and ‘Dinesh d’Souza’s Death of a Nation.’ The documentaries take extreme opposite views on Trump and his presidency – but apparently the Razzies found Trump’s performances tragically lacking in both films. The US leader, along with his “self-perpetuating pettiness,” also took home a trophy for worst screen combo.


Trump wasn’t the only MAGA hat-wearer to be awarded for his purportedly subpar “acting”: White House senior adviser Kellyanne Conway also won worst supporting actress (as herself) in ‘Fahrenheit 11/9.’

A video announcing this year’s Razzie winners showed Russian President Vladimir Putin accepting Trump’s awards on his behalf. The imaginative sequence, apparently inspired by still-completely-unsubstantiated ties between Donald Trump and the Kremlin, featured Soviet flags sticking out of the US president’s award for worst actor. The US president beat out Johnny Depp, Will Ferrell, Bruce Willis and John Travolta for their roles in various cinematic train wrecks.

“Congratulations to Donald Trump for winning a RAZZIE for Worst Actor for playing himself in both Death of a Nation & Fahrenheit 9/11. I can’t think of anyone more deserving!” joked one Twitter user.

Congratulations to Donald Trump for winning a RAZZIE for Worst Actor for playing himself in both Death of a Nation & Fahrengeit 9/11. I can’t think of anyone more deserving !

Others were less enthusiastic.

“Trump and Conway? At every turn Hollywood has to make things anti-republican. When is Hollywood going to learn and take the politics out of the movie industry? Just before this I read an article about this year’s Oscars and how they’re finding it hard to find sponsors. And people are predicting the worst TV ratings ever,” a disappointed netizen wrote in response to this year’s Razzie ceremony.

Created in 1980, the Razzie awards have served as an irreverent foil to the Academy Awards. The Oscars will be held on Sunday in Los Angeles – but sadly Trump is not up for an award.