US President Donald Trump has slammed the Pentagon’s inspector-general for releasing reports about Iraq and Afghanistan to the public, demanding even less transparency from one of the country’s least transparent agencies.

Trump told acting Defense Secretary Patrick Shanahan he wanted to stop releasing the watchdog reports to the public immediately, calling the practice “insane” during a Cabinet meeting on Wednesday. 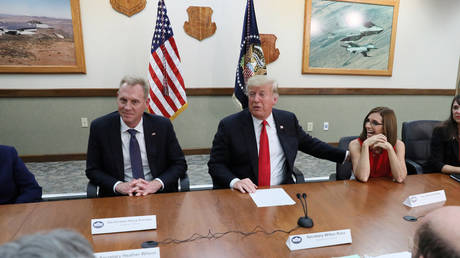 “What kind of stuff is this? We’re fighting wars, and they’re doing reports and releasing it to the public. Now the public means the enemy. The enemy reads those reports,” Trump insisted, adding that the watchdog could continue compiling the reports, but “they should be private reports and be locked up” unless a member of Congress wants to consult them.

His comments came amidst a rant about outgoing Defense Secretary James Mattis, who tendered his letter of resignation last month and was subsequently fired before he could step down at the end of February. Mattis’s departure was apparently sparked by Trump’s decision to pull out of Syria, which he followed up with an announcement that the US would also be leaving Afghanistan – another sore spot for Mattis, who had pushed for a troop surge last year.

“How has he done in Afghanistan? Not too good!” Trump reminded his Cabinet. “As you know, President Obama fired him… and essentially, so did I.”

The president’s dissatisfaction with the military watchdog may stem from November’s report from the Pentagon’s Special Inspector General for Afghanistan Reconstruction (SIGAR), which revealed that the Afghan government’s control of the country is at its lowest point since SIGAR began tracking territorial gains and losses in 2015. The government controls “or has influence over” just 55.5 percent of the country’s districts, home to 65 percent of the population, according to the quarterly report, which proved his generals’ Afghanistan strategy of throwing more troops at the 17-year-old conflict was not working.

SIGAR also revealed the Pentagon had wasted at least $15.5 billion in Afghanistan since 2008 just a few months before spectacularly failing its first-ever audit. Shanahan, then deputy Defense Secretary under Mattis, defended the failure, praising the Pentagon for following through with the audit at all.

Also on rt.com
‘I never said fast or slow’: Trump has vague timeline for ‘sand and death’ Syria withdrawal


A bombshell report last year revealed the Pentagon had “misplaced” $21 trillion over the past few decades, and the Government Accountability Office, which tracks fraud across US government agencies, consistently places it at the top of the list. With US soldiers involved in dozens of undeclared conflicts around the world, insider dealing isn’t exactly unknown.