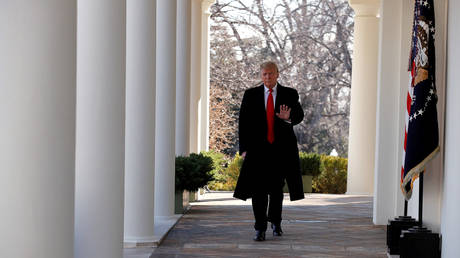 President Donald Trump’s administration has promised to “move forward building the wall” in 21 days “with or without the Democrats,” countering the #TrumpCaved narrative dominating Twitter after the president ended the shutdown.

“The only outstanding question is whether the Democrats want something or nothing,” Press Secretary Sarah Sanders tweeted as if to confirm an ambiguous message from Trump an hour earlier in which he said it would be “off to the races” if no deal was forthcoming in the next three weeks.

The president, seemingly hurt by the trending hashtag, pleaded for understanding from his base, reframing his decision to end the longest shutdown in US government history as necessary to put food back on the tables of the “incredible patriots” forced to do their jobs without pay.


Trump signed a bill ending the government shutdown on Friday evening after announcing he would reopen the government for 21 days – enough time, he said, for Congress to work on a more permanent solution to the border security issue. At the end of that period, the government would either shut down again – or he’d finally use those emergency powers he’s been talking so much about.


Some of Trump’s supporters seemed let down by what they perceived as a capitulation by their hero, though few lost faith entirely – many assuming, as usual, that there was a greater Plan and that Trump had an ace up his sleeve. House Speaker Nancy Pelosi told a press conference that she hoped the president had “learned his lesson” while her supporters celebrated the victory on Twitter with #TrumpCaved.

Pity the people who can’t or won’t see the BIG picture. Strategy is important.

I encourage everyone to listen, especially to the very end. https://t.co/sdBcSLrlaV

It’s getting hard to laugh at you people at this point. Starting to remind me of myself as kid thinking my dad was coming home. Smh sad.

He didn’t cave, it’s a strategy. He’s going to sign a temp bill that will fund the gov for 2-3 weeks. That allows him to make the State of the Union address. When we still don’t have the wall funding, he will declare a state of emergency for the wall.

He set up the board.

1. State of Union (something is planned)
2. Failure to negotiate will be Nancy & Chuck
3. He stepped back, let everyone off hook and looks like benevolent father

This is a classic.

Good news for George Herbert Walker Bush: As of today, he is no longer the biggest wimp ever to serve as President of the United States.

But it was a concession, and the concession was good for America. Thanks for realizing that the Democrats were right.