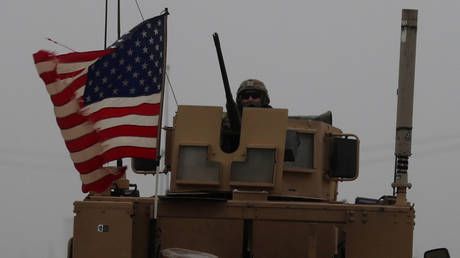 US Middle East policy is becoming increasingly confusing, as Donald Trump assured his coalition allies that “100 percent” of Islamic State will be defeated “next week.” However, the military has warned it remains a real danger.

Representatives of a 79-member, US-led coalition fighting Islamic State (IS, formerly ISIS) gathered in Washington on Wednesday, eager to hear Donald Trump’s vision of combating terrorism in the Middle East. The president lavished praise on US troops, but coalition members heard almost nothing that was new.

Further into his speech, Trump claimed that “our coalition partners and the Syrian Democratic Forces have liberated virtually all of the territory previously held by ISIS in Syria and Iraq.” What he forgot to explain, however, is that the predominantly Kurdish SDF is controlling parts of northern Syria – but not the rest of the country.

Also on rt.com
Trump cheers troop pullout… Pentagon says pull the other one


The major cities of Aleppo, Palmyra, Homs and others were in fact liberated by Syrian government forces. That aside, there were numerous damning reports that the SDF actually met no resistance when entering IS-controlled areas. Other reports suggested US Special Forces and hardware were spotted at Islamic State positions.

Trump claimed that “it should be formally announced sometime probably next week that we will have 100 percent of the caliphate.” His subordinates, however, were more cautious when talking about the situation on the ground. “The fight against ISIS and violent extremists is not over, and our mission has not changed,” General Joseph Votel, head of the US Central Command, said this week.

He warned that the terrorist group still commands approximately 1,000 to 1,500 fighters in Syria alone, adding that he is “not under pressure” to withdraw the 2,000 troops that are stationed on Syrian soil without the consent of the Damascus government.

Earlier this week, Secretary of State Mike Pompeo added more confusion to Washington’s Middle East policy. Speaking to congressional delegates, he said the US withdrawal from Syria, which Trump announced last December, “is not the end of America’s fight.”