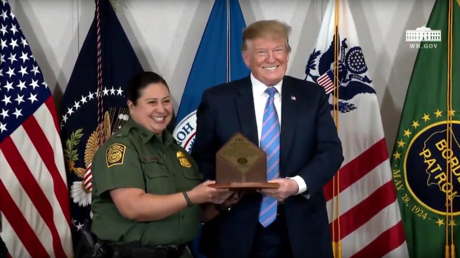 Visiting the US-Mexico border in Calexico, California, President Donald Trump declared America “full” and repeated that illegal crossings constituted an emergency, vowing to send more troops to the border and build the wall.

“It’s a scam, it’s a hoax. I know about hoaxes, I just went through a hoax,” he said at one point, indicating ‘Russiagate.’

He also said that Mexico was apprehending migrants “by the thousands,” doing more in the past four days than they have ever done before, but if that does not stem the flow of migrants he is “totally willing to close the border.”

The “colossal surge” in border crossings is overwhelming the US immigration system, and “we can’t have that,” Trump said.

Border Patrol agents at the meeting agreed with the president about the crisis on the border, and informed Trump that they had apprehended almost 200 “fake families,” migrants fraudulently claiming children in order to avoid detention.

CBP El Centro Sector chief Gloria Chavez presented Trump with a segment of the newly built border barrier, as a symbol that the “wall works.”

US Army Corps of Engineers (ACE) is building the border barrier and expects to have approximately 450 miles done by the end of 2020, General Todd Semonite said.

Not everyone agreed with the Border Patrol, however. Protesters in the area deployed the giant “Trump baby” balloon ahead of the president’s visit on Friday.

Democrats are challenging Trump’s border emergency declaration in the courts and have called it a “manufactured crisis.“