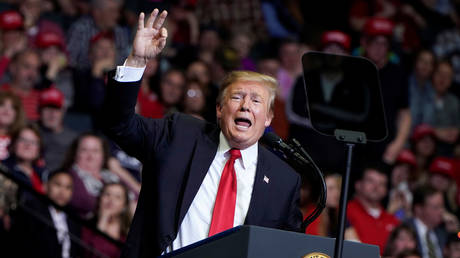 US President Donald Trump has come down heavily on Democrats for spinning the Russiagate narrative in his first Make America Great Again rally after the Mueller probe turned up no trace of collusion.

Trump fired up the crowds in Grand Rapids, Michigan, on Thursday, when he tore into the Democrats for weaponizing the Mueller probe to score political points. The FBI Special Counsel investigation that fed into anti-Russian hysteria for nearly two years concluded last week, disappointing the Russiagate-peddling media with its non-findings.

“The Democrats have to now to decide whether they will continue defrauding the public with ridiculous bullsh*t or whether they will apologize to the American people and join us to rebuild our crumbling infrastructure, bring down the cost of health care and prescription drugs… help us fix our broken trade deals,” Trump said to the storm of applause and cheers.

Trump showered himself with lavish self-praise as he took a swipe at ‘liberal elites,’ saying he is richer, better educated and has a superior intellect.

The inglorious end of the Russiagate conspiracy sent ratings of its most ardent proponents in the media like MSNBC’s Rachel Maddow plummeting and its pushers in Washington in denial.

The tables have turned on Rep. Adam Schiff, the chief Russiagater in the Democratic camp, who repeatedly claimed that there was “significant evidence” of collusion. Republicans are now holding him to account, demanding his resignation as The House Intelligence Committee chairman amid the probe’s fallout.

Also on rt.com
Trump is a gold mine for MSM, they should be the first to donate to his 2020 campaign


CNN, which fueled the conspiracy via its network of pundits and analysts, found itself on the ropes, ultimately coming up with the awkward defense that it was not their job to investigate facts.

Trump insisted that the four-page summary of the report released by Attorney General William Barr on Friday “completely and totally” exonerates him of all wrongdoing, including the obstruction of justice.

However, Democrats are now demanding the full report, which is some 300 pages long, to be released as soon as possible, as they doubt Barr’s impartiality in the case.

“For Mr. Barr to quickly issue a four-page report in his attempt to try to exonerate Mr. Trump, and now to delay the release of an over 300-page report written by Mueller has too much of the odor of political expediency to help the man who appointed him, President Trump,” Senator Chuck Schumer said Thursday.