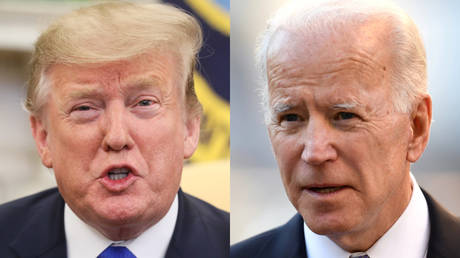 US President Donald Trump has tweeted that “tongue-tied” Joe Biden couldn’t even “deliver a very simple line” after the former vice president seemed to unintentionally let slip that he will run for president in 2020.

Trump hit out at the prospective Democratic challenger, saying that people should “get used to” such confusion from the gaffe-prone Biden, because he is just “another low I.Q. individual.”

Joe Biden got tongue tied over the weekend when he was unable to properly deliver a very simple line about his decision to run for President. Get used to it, another low I.Q. individual!

Biden told a crowd at a Delaware Democratic party dinner over the weekend that he has “the most progressive record of anybody running” – but seemed to have forgotten that he had not actually announced his own candidacy yet. Biden quickly corrected himself to say he meant anybody “who would run” and joked that he didn’t mean what he said the first time.

If Biden announces as expected, he will join a crowded field of Democrats, including California Senator Kamala Harris, Massachusetts Senator Elizabeth Warren and Vermont Senator and current frontrunner Bernie Sanders.