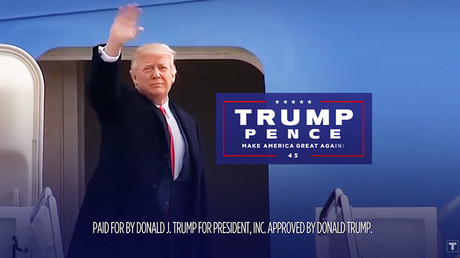 President Donald Trump has released a new television ad boasting of his administration’s achievements, setting ground for the campaign for his re-election three and a half years down the line.

“Let President Trump do his job” starts by attacking politicians and the media. “Democrats, obstructing,” the ad begins, “The media, corrupting. Career politicians standing in the way of success.”

The ad, which was also shared on the Donald J Trump for President YouTube page, goes on to point to 1 million jobs created, falling unemployment, the stock market at an all-time record high, and the strongest military “in decades,” as achievements of the president.

Much like the new Trump “real news” segments shared on the president’s Facebook page, the ads touts the same achievements. Some of these achievements, however, have been called into question. While the Dow Jones stock market topped 22,000 points for the first time at the start of August, CNN reports the Dow has reached a record high once every seven days on average since March 2013. Unemployment rates have also been falling for years, but more than 1 million jobs have been added since January.

Trump has suffered low approval ratings as president and, despite signing 42 executive orders in his first 200 days in office, many of his efforts have been bogged down in legislative challenges from both the courts and from politicians in Congress, such as the repeal of Obamacare and the Muslim travel ban.

Trump filed for re-election in 2020 the very day he took office. This allowed him to raise money and hold rallies paid for by his 2020 campaign.

“This new campaign ad speaks directly to the American people and sets the record straight, reminding them that President Donald Trump will not stop fighting for them and will not allow anyone to stand in his way to deliver success for them,” campaign manager Michael Glassner said.