US President Donald Trump is expected to reverse parts of the landmark reengagement with Cuba, championed by his predecessor Barack Obama, by imposing restrictions on travel and trade ties with the socialist island. 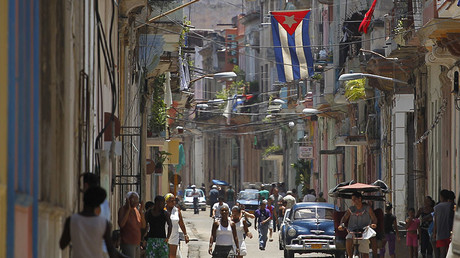 “My administration’s policy will be guided by key US national security interests and solidarity with the Cuban people,” reads the draft of the eight-page Presidential Policy Directive obtained by Politico.

“I will seek to promote a stable, prosperous, and free country for the Cuban people. To that end, we must ensure that US funds are not channeled to a regime that has failed to meet the most basic requirements of a free and just society,” it argued.

The directive stipulates American travelers will not be permitted to stay or spend money in Havana hotels or use a tour service run by Cuban Armed Forces Business Enterprises Group (GAESA), an influential consortium said to control large swaths of the island’s economy.

The proposed ban also includes any subsidiaries or affiliated companies, along with some other state-controlled entities, according to Politico. The draft directive reportedly orders the Secretary of the Treasury to consult with the Commerce Department to elaborate and implement new rules 90 days after the presidential policy is officially announced.

Additionally, buying goods and ordering services from Cuba’s private entrepreneurs who often run small cafes or bed-and-breakfast inns, will still be permitted. The new policy will not affect US government spending on the island, including at the Guantanamo Bay and the embassy in Havana.

Exempt from the ban will also be programs aimed at “building democracy in Cuba or further US interests and certain transactions with airports and seaports dealing with travel and trade,” such as docking and landing fees.

In the meantime, there are signs Trump’s new Cuba policy may be seen as a pleasing gesture for the Cuban émigré community that supported Trump’s election campaign. A sizeable portion of American Cubans disagreed with Obama’s reconciliation with Havana, prompting them to opt for Trump, who called it a “bad deal.”

Interestingly, Trump aides told AP that Senator Marco Rubio (R-Florida), an outspoken advocate of Obama’s re-engagement policy and a son of Cuban immigrants, was “very helpful” to the White House in reviewing the policy.

The US cut diplomatic relations with Cuba in 1961 following the socialist revolution led by Castro and his henchmen. In the decades that followed, Washington imposed wide range of sanctions on the island state.

Despite Obama’s rapprochement policy, the damaging embargo remains in place preventing American companies from importing Cuban goods or exporting to the island nation.