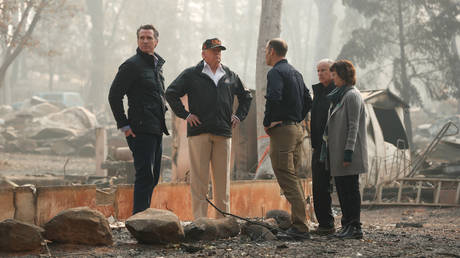 US President Donald Trump has threatened to cut off Federal Emergency Management Agency (FEMA) aid to California in the wake of devastating wildfires there, saying that the state first needs to “get their act together.”

In a Wednesday morning tweet, Trump complained that “billions of dollars” are sent to California to combat forest fires, but claimed that with “proper Forest Management (sic)” the fires would “never happen.”

“Unless they get their act together, which is unlikely, I have ordered FEMA to send no more money,” Trump said, adding that it was a “disgraceful situation.” Wildfires ravaged California in November, leaving at least 89 dead and thousands of people displaced.

Billions of dollars are sent to the State of California for Forest fires that, with proper Forest Management, would never happen. Unless they get their act together, which is unlikely, I have ordered FEMA to send no more money. It is a disgraceful situation in lives & money!

California Governor Gavin Newsom, who was sworn in this week, was quick to fire back at Trump, tweeting that disaster and recovery periods are “no time for politics” and claiming he was “already taking action to modernize and manage our forests and emergency responses.” A Democratic strategist who previously worked for Newsom also weighed in, quipping to Politico that Trump should be more concerned about the “dumpster fire that is his administration.”

Disasters and recovery are no time for politics. I’m already taking action to modernize and manage our forests and emergency responses.

The people of CA — folks in Paradise — should not be victims to partisan bickering.

Trump has made similar threats about FEMA funds before, saying in November that he might pull money for disaster relief because of what he called the state’s “gross mismanagement of the forests” – although Trump’s critics have pointed out that the federal government controls 60 percent of the forest land in California.

State officials have also dismissed Trump’s accusations, saying that forest management is only one element of the problem and claiming also that symptoms of climate change like stronger winds and dryer weather could also contribute to the fires.


Trump’s threats don’t seem to match up with his actions, however. In November, he declared a state of emergency in California and tweeted that he was eager to “alleviate some of the incredible suffering going on.” He even visited the state to see the destruction firsthand and toured what was left of one destroyed town, which had formerly been home to 27,000 people.

The president found himself the subject of mockery on social media during the visit, however, after claiming that Finnish President Sauli Niinisto had told him that frequently raking the forest floor would help avoid fires – a forest management strategy that Niinisto later denied suggesting.