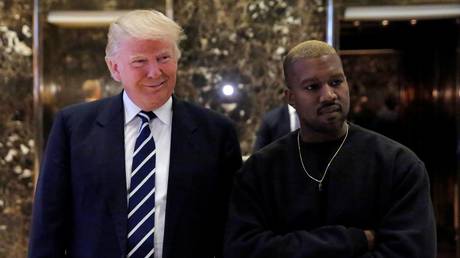 Despite quitting politics a few months ago, Kanye West started 2019 with tweets of support for Donald Trump and promise to wear his MAGA hat on stage. The display of affection didn’t go unnoticed by the US president.

“Thank you to Kanye West for your nice words,” Trump wrote in his favorite microblog on Saturday.

Thank you to Kanye West for your nice words. Criminal Justice Reform is now law – passed in a very bipartisan way!

n the same tweet, the president expressed his satisfaction over the unity shown by both Republicans and Democrats in supporting the Criminal Justice Reform. Trump signed its First Step Act into law in late December.

The US leader was apparently grateful to West for a series of passionate posts he made on New Year’s Day. “Trump all day,” he wrote to his 29 million followers, adding: “just so in 2019 you know where I stand.” During his tweetstorm, the rapper also vowed to only perform in his ‘Make America Great Again’ hat and said the fact that the vast majority of black voters were Democrats sounded “like control” to him.

Kanye publicly praised the reform when he met Trump in the White House in October. The rapper called Trump his “hero,” dropped an F-bomb and delivered a 10-minute monologue about the president, racism and the media. He faced massive backlash from the liberals for that visit and was branded “mentally ill,”“crazy” and “illiterate” with “clinical issues.”


A few weeks later, West suddenly stated that he was done with politics for good and wanted to concentrate on his music. “I’ve been used to spread messages I don’t believe in,” he wrote on Twitter, denying claims that he helped design the logo for the ‘Blexit’ movement, which is pushing for African-Americans to leave the Democratic Party. Turns out, Kanye was only taking a break until the end of the year.