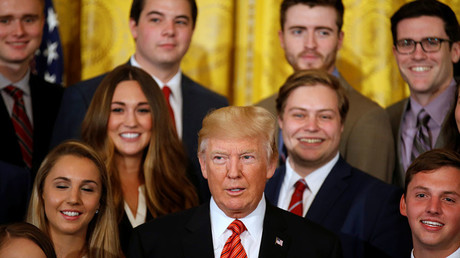 Journalists are criticizing President Trump after he rolled his eyes and told a reporter to be “quiet” when he was questioned about Attorney General Jeff Sessions and healthcare during a White House photo op.

Trump was posing in front of media for a photo with White House interns Monday when he was asked by Associated Press reporter Catherine Lucey if he thought Sessions should resign, to which he rolled his eyes.

When Lucey followed up by asking if the president had a message about healthcare, Trump simply replied, “Quiet!” much to the amusement of the laughing interns.

Trump then turned to the hysterical group to tell them reporters are “not supposed to do that.”

Trump tells the interns that reporters are “not supposed to do that” (ask Qs). Yes, they are. They’re not sheep just there for the photo-op. https://t.co/v2KraCDdMk

In addition to the president’s condensed lesson in journalism, the group’s overwhelming lack of diversity did not go unnoticed on social media.

Earlier Monday, Trump called Session “beleaguered” in a tweet that questioned why the US attorney general and Congress aren’t “looking into Crooked Hillarys crimes & Russia relations?”

So why aren’t the Committees and investigators, and of course our beleaguered A.G., looking into Crooked Hillarys crimes & Russia relations?