Donald Trump has tweeted that a “big trade agreement” with Mexico could be coming soon and America’s relationship with its neighbor is “getting closer by the hour” – despite two years of tensions over his much-touted border wall.

“Our relationship with Mexico is getting closer by the hour. Some really good people within both the new and old government, and all working closely together… a big trade agreement with Mexico could be happening soon!” Trump tweeted on Saturday morning.

Our relationship with Mexico is getting closer by the hour. Some really good people within both the new and old government, and all working closely together….A big Trade Agreement with Mexico could be happening soon!

While the tweet might come as a surprise, it is possible that brighter days are on the horizon for US-Mexico relations. The Central American country’s president-elect, Andres Manuel Lopez Obrador, said on Friday that progress was indeed being made in the renegotiation of the North American Free Trade Agreement, which Trump had dubbed a “disaster” for US workers and industry.

Lopez Obrador, who will take office in December, also thanked Trump on Friday for being respectful towards Mexico and Mexicans in recent months. 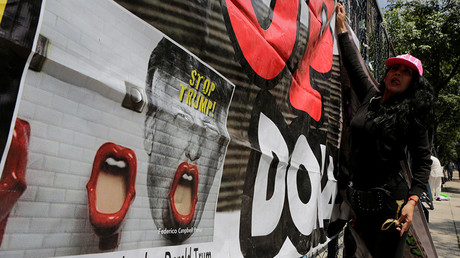 “I appreciate the respect that President Trump has shown us,” Lopez Obrador said. “I am also thankful that until now he has been very prudent in referring to Mexicans and has not made offensive comments. All of this I have to recognize and appreciate.”

The Saturday tweet comes despite Trump’s hardline stance on Mexico, which began during his presidential campaign, in which he said the US would build a wall on the US-Mexico border and make Mexico pay for it.

That claim prompted a response from the outgoing Mexican President Enrique Pena Nieto, who insisted that his country would not be paying for a wall and canceled a planned visit to the White House over the matter in January 2017.

A leaked transcript later showed that Trump reportedly told Pena Nieto in a phone call to stop publicly stating that Mexico wouldn’t pay for the wall. “If you are going to say that Mexico is not going to pay for the wall, then I do not want to meet with you guys anymore because I cannot live with that,” Trump is heard telling his Mexican counterpart, adding that funding “will work out in the formula somehow” and “come out in the wash.” However, Trump later suggested that the US military might be the one actually footing the bill.