Donald Trump has blasted the DOJ for being part of a ‘deep state’ conspiracy as he urged ‘jail’ time for Huma Abedin for using a non-secure private email account while conducting government business.

“Crooked Hillary Clinton’s top aide, Huma Abedin, has been accused of disregarding basic security protocols. She put Classified Passwords into the hands of foreign agents. Remember sailors pictures on submarine? Jail! Deep State Justice Dept must finally act? Also on Comey & others,” Trump tweeted, referring to the former FBI director and an incident where a US sailor was punished for sharing a photo from inside a submarine.

The president’s comments came after a Monday’s report by the conservative Daily Caller, blaming Abedin for sending government passwords to her personal Yahoo email box in 2009, which was later compromised during the massive hacks of the company’s accounts in 2013 and 2014. 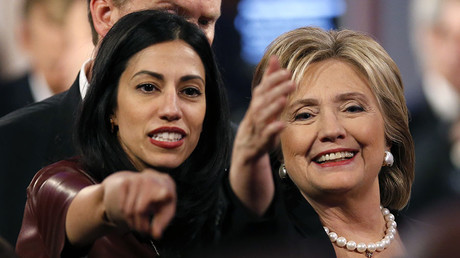 Abedin, who used to be Secretary of State Hillary Clinton’s deputy chief of staff between 2009 and 2013, “used her insecure personal email provider to conduct sensitive work,” the website wrote after analyzing her 2,800 emails released last Friday under a lawsuit instituted by the conservative group, Judicial Watch. “This guarantees that an account with high-level correspondence in Clinton’s State Department was impacted by one or more of a series of breaches — at least one of which was perpetrated by a ‘state-sponsored actor.”

Last year, Yahoo confirmed that all of its three billion accounts were affected by a major hack in 2013. A year later, another 500,000 accounts were compromised and accessible for perpetrators through forged cookies in 2015 and 2016. The FBI charged four people, including two agents of Russia’s Security Service (FSB), for the breach.

Abedin should be put in jail for what she did – just like the US Navy sailor Kristian Saucier, who was sentenced to a year in prison in 2016 for taking photos of classified areas of the nuclear submarine USS Alexandria back in 2009, Trump said.

With the investigation into Trump’s alleged links with the Russian government during the 2016 presidential campaign limping on, the president has strongly suggested that the “deep state” ‒ the bureaucracy entrenched in US law enforcement agencies ‒ has been working to undermine his presidency. Both Trump and Moscow have repeatedly denied any collusion, saying there was no proof to back the accusations.

In his tweet, the president also mentioned former FBI Director James Comey, whom he previously blamed of leaking sensitive data to the media. Comey was leading the probe into Russian meddling before being sacked by Trump last May because, as the president put it, “he wasn’t doing a good job.” After his dismissal, Comey testified that he had taken notes of his interactions with Trump which were later passed to a New York Times reporter.

Meanwhile, former top lawyer for the Obama administration, Neal Katyal, blasted Trump for being “so disrespectful” to Department of Justice staff, saying they were working hard for the benefit of the US state.

Deep state DOJ? I’ve never heard of a President so disrespectful to the career women and men of the Justice Dept, who work hard every day at enormous sacrifice to protect the rule of law. (No doubt their integrity is precisely the reason why Trump is worried.) https://t.co/rdSiFzeD26