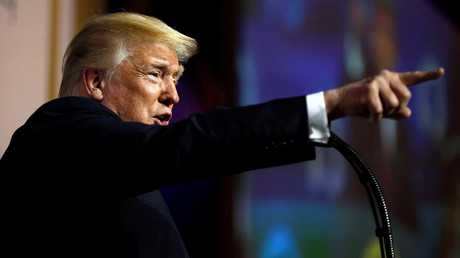 US President Donald Trump has slammed the “criminal deep state” in another early morning Twitter rant after reports emerged that the FBI had planted informants in his 2016 presidential campaign to monitor his contacts with Russia.

In a subsequent tweet, Trump dubbed the controversy “SPYGATE” and said it could be “one of the biggest political scandals in history.”

Trump also said that the allegation of collusion with Russia was a “made up Scam” and that efforts to expose him for collusion had turned around and backfired on the deep state.

The deep state has “ended up getting caught in a major SPY scandal the likes of which this country may never have seen before!” he wrote. “What goes around, comes around!”

Look how things have turned around on the Criminal Deep State. They go after Phony Collusion with Russia, a made up Scam, and end up getting caught in a major SPY scandal the likes of which this country may never have seen before! What goes around, comes around!

Media reports last week indicated that an FBI informant had been in contact with at least three members of Trump’s presidential campaign — advisers George Papadopoulos, Carter Page, and Sam Clovis.

Trump also quoted recent comments from former Director of National Intelligence James Clapper, who said during a Tuesday appearance on ‘The View’ talk show that the president should be happy to learn that someone had been spying on his campaign.

“’Trump should be happy that the FBI was SPYING on his campaign’ No, James Clapper, I am not happy,” Trump tweeted, adding that spying on a campaign would be “illegal” and a “scandal.”

Last week, Trump instructed the Department of Justice to investigate the claims of spying and to look into whether any demands or requests to infiltrate his campaign were made by former President Barack Obama’s administration

“If they had spies in my campaign for political purposes, that would be unprecedented,” Trump said during a meeting on Tuesday in the Oval Office with South Korean President Moon Jae-in.

On Monday, Trump also blasted former CIA Director John Brennan as a “disgrace” and accused him of leading the effort to frame him for collusion.