Donald Trump says the solution to the immigration crisis is simple – don’t enter the country illegally. It comes after his administration admitted it would not be meeting a deadline to reunite separated families. 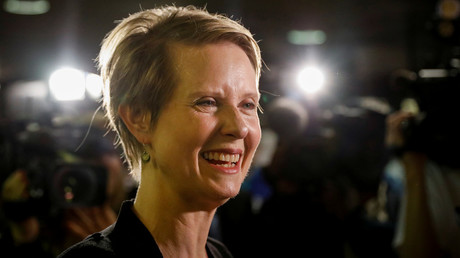 “I’m saying this very simply: We have laws. We have borders. Don’t come to our country illegally. It’s not a good thing.”

His comments come as lawmakers and citizens across the US are divided on how to handle those entering the country from Mexico, and after global outrage was sparked following the administration’s separation of children from their parents. That policy was later reversed by Trump, who stated that his wife Melania played a role in convincing him to change course.

However, thousands of children still remain separated from their parents. And despite a court-ordered deadline which stated that 102 of those children should be reunited with their families by 10pm EST on Tuesday, the administration admitted on Monday that it would only be able to reunite just over half of them by then.

On Tuesday, the US government said it believes it is in compliance with the deadline, despite only expecting to reunite 38 of the 75 children who were still eligible to be reunited with their parents. It said the other cases require authorities to first determine parental fitness or eligibility and that, in some cases, it still needs to make contact with a parent released from detention.

Meanwhile, the US government said it believes it is in compliance with the deadline, despite only expecting to reunite 38 of the 75 children who were still eligible to be reunited with their parents on Tuesday. It said the other cases require authorities to first determine parental fitness or eligibility and that, in some cases, it still needs to make contact with a parent released from detention.

Trump’s Tuesday remarks have prompted reaction on social media, with University of Alabama law professor Joyce Alene stating that although Trump referred to “illegal” entry in his Tuesday remarks, “many of these folks were lawfully presenting themselves to seek asylum” in the US. “So much for the rule of law,” she wrote.

Regarding the administration’s failure to meet the reunification deadline, Republican strategist and political commentator Ana Navarro accused it of “just not giving a damn” about separated families.

Thai boys were rescued from cave. They’re now reunited with their families. Hallelujah.
Now, can we turn our attention back to the children in our own country? The Trump (mis)Administration is missing the court deadline to reunite immigrant children. They just don’t give a damn.

As children continue to be separated from their parents, Washington politicians seem more intent on scoring points against their political adversaries than sitting down to come up with a solution. Trump has blamed “extremist, open-border Democrats” for the country’s immigration problems, and called them out for mistakenly sharing photos of immigration children being held in cages at detention centers which were actually taken during the Barack Obama administration in 2014.

But the immigration crisis isn’t new, and the US government tried and failed to pass any sort of immigration reform under the George W. Bush and Obama administrations. The idea of reform gained momentum during Bush’s presidency, but never made it through the two chambers of Congress. When Obama’s DREAM Act failed to overcome a filibuster in 2010, he took matters into his own hands in June 2012, signing an executive order to allow young immigrants to be protected from deportation. He described it as a “stopgap” until Congress could pass legislation.

As Congress returned to work on Monday, they had no clear plan or timeline to address the heated and divisive issue which is an extremely important one ahead of the mid-term elections in November. A Reuters/Ipsos opinion poll released Friday found that immigration is the number one topic on voters minds, topping the economy and healthcare.